Home/Memorial Stadium: Home of the Huskers Football Team
Previous Next 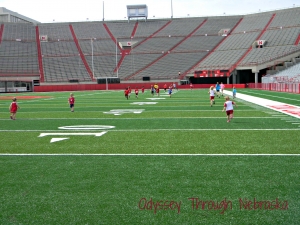 One of my favorite Lincoln places to go for a tour is Memorial Stadium: home of the Huskers football team.  In fact, when I was in charge of setting up outings for my MOPS (Mother of Preschoolers) group, this one topped the list.  Why was this the favorite outing every summer?  The tour guides were definitely perplexed.  After all, why are little kids excited about touring an athletic complex?  Most the kids in our group have grown up Husker.  Even at a young age, they get the Husker hype.  But a big part of their excitement is probably the fact that they get to run out on the field. 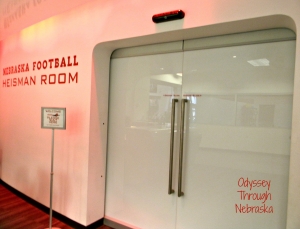 But even more than that, there is just excitement in the air when you are in the building.  (As a visitor anyway! 🙂 )  Seeing the state of the art equipment.  Possibly seeing players and coaches (why, hello, Kenny Bell!).  And watching the video in the screening room that shares all about Husker football.

I could see why people who are not from Nebraska might be confused.  After all, many states have several college teams to choose from, not to mention professional sports of every variety.  If I tell a fellow Husker, I was born on a football Saturday, they get the pride in that.  People from other places might be a tad bit concerned about me. 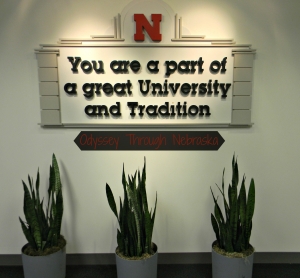 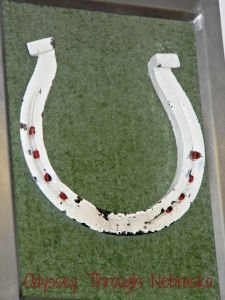 Getting to walk down the hallway where the players run out on the field is always fun.  Right over the doorway to the outside walkway is the Husker lucky horseshoe.  Evidently all of the players touch the horseshoe before heading out to the field.  On the doorway header, the horseshoe is an easy reach for the players.  As for the little visitors, this symbol is a bit of a reach.  Watching all of the kids try to jump and touch it is rather amusing.

While they give tours all of the time, you do need to set up one in advance.  Wednesdays and Thursdays are the usual days.  The other rule that I just heard this last visit is that you cannot ask players or coaches for autographs or take any unauthorized pictures.  (And unless you happen to have a press pass, all pictures would be considered unauthorized!)  Makes sense since while we are there for fun – they are there to work.  Although the experience is not quite the same as attending a live football game, taking a tour is a close second.

So, in honor of this week’s first fall football game, I definitely think that is fitting that I wrote about Memorial Stadium for “there is no place I’d rather be.” (Sorry the words are a bit blurry!)

And while I can hold my own in a football discussion, although not compared to my 10 year old, I still think I will refer any of you who want to know more about the Huskers football team to the official Huskers N’Siders blog.  They seem to know more what they are talking about than I do (imagine that).  Will you be watching the first University of Nebraska football game?  Our family will probably make it through half since we do not get the game on our tv (no cable!)  Or maybe you get to attend this week’s contest – going to the games are such a fun experience! 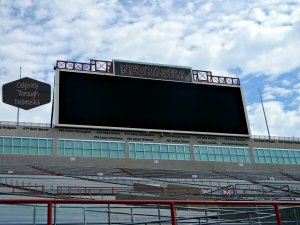