Review of Lost Restaurants of Omaha by Kim Reiner

Review of Lost Restaurants of Omaha by Kim Reiner

When you are writing a book, having a buddy who is doing the same definitely makes the process more fun.  I was given that gift as my friend, Kim, wrote her book, Lost Restaurants of Omaha at the same time that I wrote Detour Nebraska.  While I wish I could say that we met often for collaborative coffees, that was not exactly the case.  Mainly we exchanged frantic e-mails.  But knowing she was experiencing similar things as me definitely made the process easier.  Even if we could not exactly connect.  The best part might be the fact that our books ended up being book birthday twins.  Both of our titles were released on October 30th, 2017, by the History Press.  And tomorrow, we actually have our first book event together.  More on that a little bit later on.

When she asked if I wanted to be a part of her book launch, that was an easy “Yes.”  I did not care that I was trying to launch my own book.  Reading hers was something I knew I had to make time for.  Of course, I did allow myself to wait to read it until a few weeks after its release.  One does need to be realistic about time.  Since I finished Lost Restaurants of Omaha this week, I am excited to finally be able to really recommend this title.

I knew I was going to like the book.  After all, my friend wrote it.  But I had no idea how much I would REALLY enjoy the book.  Generally I am a fiction girl because reading is how I unwind.  Often non-fiction requires too much thinking for my tired mommy brain.  But very quickly, I realized that Kim’s book was not that way.  I could not put it down.  As a sometimes foodie, hearing about the specialties of these former restaurants made me want to seek out recipes to try them myself at home. (And made me try to scope out the Louise Salerno cookbook at used bookstores.  So far no luck!)  As an aficionado of Nebraska history, I greatly enjoyed learning more about how these eateries impacted the history of Omaha and beyond.

In Lost Restaurants of Omaha, Kim highlights the menus and history of 30 now-closed Omaha restaurants.  She includes hard-to-find pictures of places closed for decades.  And she even tells about menus including prices.  Her well-researched book is fascinating! 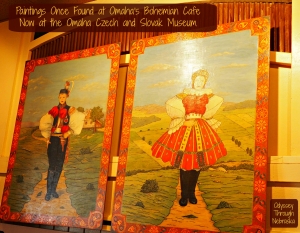 One of the dining establishments that she talks about her book fits in perfectly with my previous posts this week. (Celebrating a Nebraska Czech Christmas).  The Bohemian Café was the place to “Czech” out in Omaha for over 92 years.  Since this restaurant only closed on September 24, 2016, the link to their Facebook page is actually still live.  Some of their restaurant décor is now at the Czech and Slovak Museum in Omaha.  The subtitle of this chapter made me smile – “Where Everyone One Was Czech for the Day Because That is How Long the Dumplings Stayed with You.”  For some reason, our family never dined there.  I think this would have been a great way for us to celebrate part of my husband’s heritage.  Sometimes you think restaurants will be open forever. Then they aren’t, and you regret not visiting.

I think my family went to one of the steakhouses found in the book, but I am not certain.  That is the only melancholy note of the book for me.  I did read with a small touch of sadness for some of the culinary opportunities that I missed.  Of course, many of the restaurants were closed before I was born, so there is nothing I can do about that.  Maybe not all is lost.  I did discover a link to a site that tells how to make some of the recipes once found at at least one of the Omaha locations.

More from Kim Reiner, the author of Lost Restaurants of Omaha …

Rather than simply telling you my high opinions of the book, I decided I definitely needed to interview the author.  I thought it would be fun to find out a bit more of Kim’s connections to the book.

Which Lost Restaurants of Omaha did you visit while they were still open?

“I’ve been to the French Café and Mr. C’s, and the restaurant that followed Angie’s (Lucky’s).  There are many that I regret not going to when I had the chance.”

Which Lost Restaurants of Omaha do you wish would open again, so that you could eat at them?

“I’d love to be able to dine at some of the really special ones like Café de Paris and Café Beautiful.

What surprised you the most to discover while you were researching Lost Restaurants of Omaha?

“I was surprised by the way city and national politics and movements played out in the restaurants, from Civil Rights to the effects of war.  And I still can’t believe the story of Italian Gardens and how it was bombed the days before opening.  And that case has still never been solved.”

This week-end you have TWO opportunities to meet Kim and pick up a copy of her book.

Today (Saturday December 16th), Kim will be at the Sarpy County Museum in Bellevue from 1-3.

Tomorrow (Sunday December 17th), Kim will be at The Bookworm in Omaha, also from 1-3.  If I had to pick which event for you to attend, I would pick this one BECAUSE I will be there as well, selling and signing copies of  Detour Nebraska.   Another author or two is going to be there as well.  We would love for you to come out and say “Hi.”

To buy Lost Restaurants of Omaha

Unable to attend one of the book signings?  Kim’s book can be found in many Omaha bookstores.  You can also purchase her book online.  Note: this is an affiliate link.  If you click on the “buy now” button, you are supporting my writing at no additional cost to you.  Thank you for that!

I am going to finish with some thoughts from Kim on how she picked which places to feature in Lost Restaurants of Omaha.  (This is the last paragraph in her Introduction found on page 13).

“It was not easy narrowing down the list of restaurants to include.  Some restaurants were opened for decades, serving generations of families.  and the choice to include them was easy.  Other restaurants I included only lasted a short while, but they had a memorable story that I wanted to share.  I hope you enjoy their stories as much as I did.”