Home/Celebrating Veterans at the Nebraska History Museum
Previous Next

Tomorrow is Veteran’s Day.  In recent years, our country has been providing more perks and benefits for Veteran’s Day around this holiday.  That makes me glad.  Celebrating veterans is important!  When we were at the Nebraska History Museum on Tuesday, I noticed that they have an excellent display celebrating veterans.  I thought today would be the perfect time to introduce you to some of their artifacts that celebrate veterans.

Let’s start with the feature image.  This might be one of the oldest Nebraska’s artifacts on display at the museum.  This medal of honor dates back to 1865.  Nebraskan Victor Vifquain wanted to see action in the Civil War so badly that he did not wait for Nebraska to send soldiers.  Instead he enlisted in the New York infantry.  As that group was stopped before it started, his dreams of serving where short lived until he was appointed to be the 97th Adjutant by the Illinois governor.  In the Battle of Fort Blakely, he helped lead a charge to victory.  He was the first Nebraskan to win this honor. 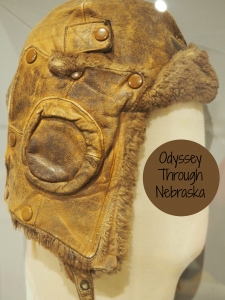 As we continue on, let’s continue celebrating veterans with a guessing game …

Any guesses as to the era of this historic helmet?  Or even better yet the conflict that this headgear represents? 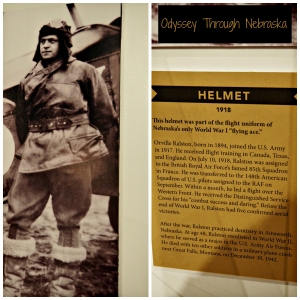 If you decided upon World War One, you would be correct.  According to the sign, this particular helmet was worn by Orville Ralston.  He was Nebraska’s only World War One flying ace.  I must say he does look rather impressive in his flight suit.  His distinctions were equally impressive as he won the Distinguished Service Cross.  Later Ralston became a dentist in Ainsworth.  He reenlisted and became an Army Air Forces major.  Sadly he lost his life along with other soldiers in a 1942 crash. 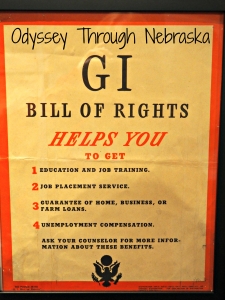 This GI Bill hung at the Alliance Army Air Field around 1944.  I can’t help but wonder how many man and women this inspired to want to serve.  I wonder when we celebrate veterans if some of them were persuaded to fight because of signs like this.

As for this last collage, well, I am going to leave you with a bit of mystery.  After all, I think that if we are going to truly be celebrating veterans we all need to go actually see the exhibits.  Looking at pictures and seeing the artifacts are completely different. 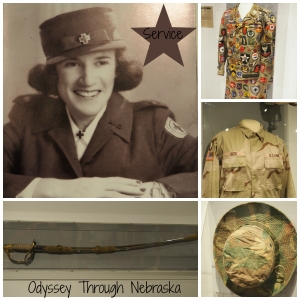 I will give you a few hints.  Or at least ask you a few questions.  What was the lady’s connection to Nebraska?  Which conflicts are represented by the clothing?  Why could the jacket with the patches no longer be worn in public?  What notable soldier received the sword as a gift?  Although this man was not born in the state, Nebraskans definitely claim him as their own.

Aren’t you glad that the Nebraska History  Museum is celebrating veterans?

Now if you happen to live out of town and are unable to see the displays, I am glad to tell you more.  Simply send me an e-mail at odysseythroughnebraska@gmail.com, and I will answer your curiosities.  And there may be answer or two found in the post tags as well.  Seeing this collection is a reminder that we need to be celebrating veterans every day!