Enjoying our Day on a Nebraska Farm

Home/Enjoying our Day on a Nebraska Farm
Previous Next

Enjoying our Day on a Nebraska Farm

My grandpa was a farmer.  My two uncles have also farmed at various times.  In fact, while I never met them, three of my great grandpas were also farmers!   But I do think that is rather pathetic that my first time ever to ride on a combine was right before I turned 39 years old.  Pretty sad that I waited so long to experience a Nebraska farm harvest.

Not like I didn’t spend time out on my family’s Nebraska farm growing up – we were out there several times a year.  I have many memories of going out to “put up” sweet corn (more on that later this week!).  So, I don’t know if we never were out at harvest time or if my uncles were too busy working to drive a girl around.

Last fall I asked my uncle if I could remedy that.  So, we went out, picked up my aunt and met him at his nephew’s farm.  We all took turns riding along inside the combine.  Watching the corn be sucked up in the chute was rather cool. I am sure my contained excitement was rather amusing to the farmers who watch this all of the time!  We had a great time purposefully experiencing a Nebraska farm.

I would imagine that riding along in air conditioned combine is a bit different than farming once was.  Newer machines are definitely cooler.  But I do think that the technology still requires long days of farming.  You can get more done, so you have more fields to do.

We also went by the homestead and to go see the cows.  Yep, we’re city folk.  My kids liked it all, other than the farm dog that had a bit too much energy for my littler ones. 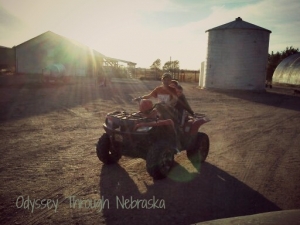 After the men needed to actually get back to work (we were slowing them down a bit), we headed out to our second Nebraska farm – to the home of my cousin, his wife and kids.  This was the point at which my kids were convinced that maybe we should relocate.  Especially after they rode on the 3 wheeler around the farm!

I am so thankful that we had family that allowed us to hang out for the day.  (We love you!) Sometime soon I hope to share about some area farms that allow visitors because everyone in Nebraska should get to have a day on the farm.