Home/Tractors, Travel and Tomorrow
Previous Next

This week my mind has wandered many directions.  As I continue my farm week, I am thinking tonight about tractors.  Also I am pondering how I started being interested in travel.  Most of all, I am thinking about tomorrow, and the direction that I am planning for this blog. 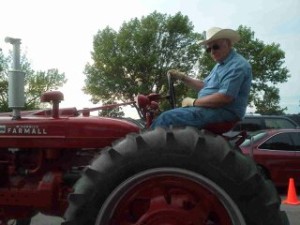 As I continue my farm week, I am thinking tonight about tractors.  My parents have a couple out at their house including the antique Farmall tractor of my uncle’s that my Dad helped to restore.  (I’ll try to post some more pictures on my Facebook page soon!)  The tractor that he has had the longest is the one that he used to use to plow out his acreage driveway, along with many of his neighbors.  That stopped a few years ago when he realized the advantage of putting a blade on his truck and riding inside away from the elements.

But there is just something so American/Nebraskan about tractors.  Although I can’t see a tomorrow where I am getting to drive one.  Considering as a teenager I once “crashed” the riding mower into the power generators box knocking out electricity for a few hour maybe that is a good idea to keep me away from that high springy seat.  This might be a story for another day.  Or maybe not.

Here are a few other people who feel the same way about tractors. (All quotes were found at Brainy Quotes.)

That’s the great thing about a tractor. You can’t really hear the phone ring.
Jeff Foxworthy

My father kept me busy from dawn to dusk when I was a kid. When I wasn’t pitching hay, hauling corn or running a tractor, I was heaving a baseball into his mitt behind the barn… If all the parents in the country followed his rule, juvenile delinquency would be cut in half in a year’s time.
Bob Feller

Maybe I should just go home and ride my tractor.
Chuck Grassley 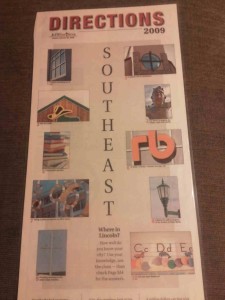 We did go places as a family growing up.  Usually they involved the site where my Dad had meetings – Mom would take us shopping, then later our whole family would go to a baseball game.  Where my sister and I would bring magazines, much to my brother’s chagrin.  This is rather ironic now since we both actually really like baseball.

I did not completely realize how much my traveling changed me.  That is until I started teaching my own children.  And when I had the opportunity to teach a weekly middle school geography class once a week.  I began to recognize how much experiencing other places impacted me.  While our travel with four kids is a bit limited due to budget and time constraints, I can still enjoy nearby adventures with our kids.  This is another reason why this blog has been fun for me!

The focus of my geography class started with terminology, world wonders and more, then moved to the world, then the United States, then Nebraska and Lincoln.  For our week of studying the capital, we used an excerpt from the Lincoln Journal Star to assist in our learning.  Several years ago, they ran a weekly series identifying different places in Lincoln, only showing just a glimpse.  You were supposed to try to guess where the pictures were taken.  I tried to find a link for that, but since the series ran in 2009, the link seems to be long gone.  So, I took a picture of one of the sheets, just so you can see the idea.

These sections ran on Sunday February 22, 2009.  Pictures were taken by Erin Duerr for the Lincoln Journal Star

Until I started writing a history/travel blog, I did not realize how much my photography skills were going to need to grow.  In the past, I noticed my blogging friends sent out a post featuring “Wordless Wednesdays.”  I was amazed that they could say so much with just pictures.

I decided that I would also like to start doing that, at least some weeks.  But with a twist.  I am going to take the idea from the Journal and try that on this blog.  Rather than showing you complete pictures of where we have been, I am just going to show you glimpses.  Then we will see who can guess correctly.  I wish I could offer you grand prizes. Mainly it will just be the satisfaction of knowing you determined where we had visited just by seeing the pictures.  🙂

Anyway, sometimes the locations will be obvious, but other weeks they may be trickier.  I guess it will depend on what angles I manage to capture with my fledgeling photography skills.  I am excited to keep improving.  Maybe there is a tomorrow where I will even be considered a shutterbug rather than just a bookworm!  Notice my insect terminology – obviously 3 out of my 4 kids are boys!