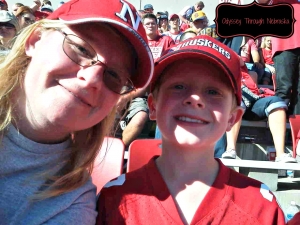 As I posted earlier on my Facebook page, today I went to Nebraska’s 3rd largest town with my favorite 10 year old.  In case you are not from Husker Country, Memorial Stadium with 90,000 + people goes beyond all other Nebraska towns (besides Lincoln and Omaha of course).

I grew up going to games as my Dad’s office had tickets.  I am sure I took that experience for granted.  As time has passed and prices have increased, the number and frequency of tickets has decreased.  Plus our family has grown through marriage and grandkids (only I have kids so far), so the guarantee of getting to go once per season is no longer there. 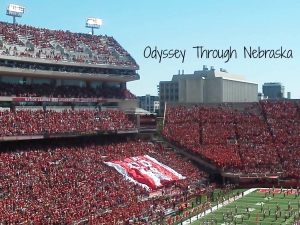 Watching the band perform before the game.

This game our tickets were in the North Stadium.  I missed being able to see the Megatron screen that was right above our heads – we did not get to miss hearing it (that was a bit loud!)  But the people around us were really nice (and the guys next to us even gave my son one of their extra Gatorades.  Love Husker fans!) 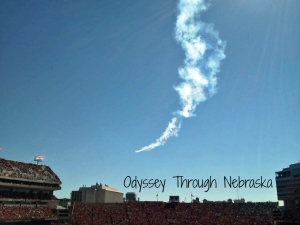 The pre-game flyover.  I forgot to have my camera ready, but you get the idea.

The game was a non-conference one.  Although the final score was a bit lopsided, we still had fun watching.  The Huskers played better this week, at least during the last three quarters they seemed to “execute” (Coach Bo’s big word). 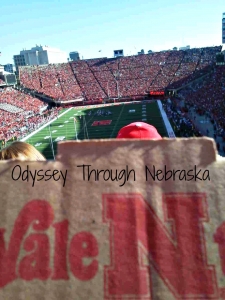 We shared a piece of Valentino’s pizza for a halftime snack.  The pizza was yummy and looked better than the box.  But hey, we devoured the slice too quickly to take a picture of the actual piece. 🙂

If you have never been to a Husker game, the experience is like no other.  The cheering crowds. The trivia.  The music.  The band.  Oh, yeah and the quality football.  We enjoyed it all!

One of my favorite parts is seeing the post game prayer huddle.  Last week the opposing team participated as well – this week, we only saw red.  Not sure why …

The prayer huddle is in the middle.  The cell camera just does not zoom very far … 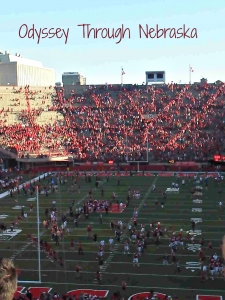 Since only the two of us went, we were not in a hurry to leave.   My brother was there, so we talked to him.  Then we eventually made our way down to the field.  My son had fun running on the field.  What a great way to spend the afternoon! 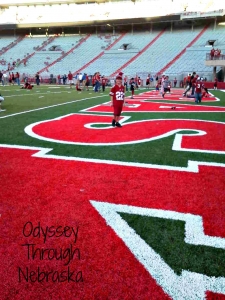 P.S. Thanks, Uncle Joel, for the bottled water, popcorn and the dogs!  Seeing you there was a highlight!