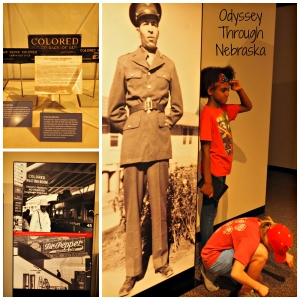 Understanding all aspects of United States history is a bit complicated.  This is exactly why I feel like exhibits like this are so important.  I want my children to grow up knowing that there are many sides to the story.  We attended the African Americans fighting exhibit with some friends.  Our kids enjoyed getting to see and listen to firsthand stories of what life was like for African Americans then.  This is not an easy exhibit to comprehend.  Prejudice is not palatable to me. One unexpected result was that the kids ended up role playing.  This seemed to help them understand what was happening.  Most of the exhibit is fairly safe for kids.  But we did note the firsthand tales of segregation did contain language.  This is not too surprising since that was a rough period of time. 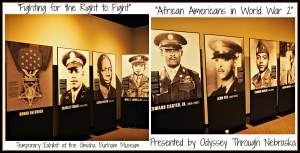 African Americans Fighting and Why It Matters

One of my favorite parts was learning about the African American fighting heroes who served.  Seeing the drawing of one soldier moved me to tears.  According to the displays, there are no photographs of Willie James, Jr. anywhere.  Despite the fact that her husband saved many lives, his widow could only have a drawing done to remember him.  In this digital age, that concept was completely foreign to me.  All of these men are relatively unknown in the history books. I am glad that their contributions are now being celebrated. 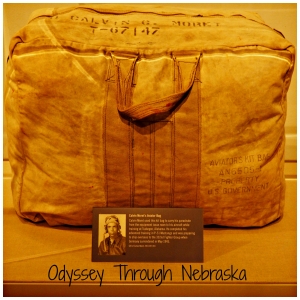 The memorabilia found in the display helps to personalize the conflict.  Seeing items that were once used in war make the experience seem more real.  This bag was used by aviator Calvin Moret, who used this kit bag to carry his parachute during his time of training.  Although some of the African Americans fighting equipment was limited, at least they were given the basics. 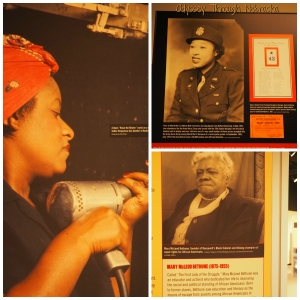 Although many of the exhibits are about African Americans fighting men, the women are not forgotten.  Stories about the influential African American women are also on the walls.  Although women were not allowed on the front lines, they still made an impact. Nurse Alberta Holt was one of the few African American women allowed to serve overseas.  Until last year, I was not familiar with how Educator Mary McLeod Bethune made a difference on the home front by encouraging the development of fair schooling.

Fighting for the Right to Fight is temporarily in Omaha

I feel like this is African Americans Fighting Soldiers is a valuable because it explains another side of history.  This temporary exhibit will be at the Durham Museum in Omaha through July 15th, 2018.  Before you go visit, you may want to watch this video prepared by the National World War 2 Museum in New Orleans.  This traveling exhibit originated at their New Orleans location.