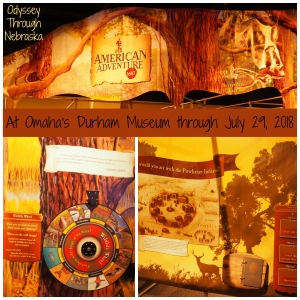 Besides enjoying Nebraska history, not surprisingly I am also a fan of United States history.  My fifth grade teaching job included that course, and I was thrilled.  When I found out that the Durham Museum in Omaha was hosting the American Adventure 1607 exhibit, I knew exactly what this display was going to feature.  Jamestown!

A quick refresher course on early American settlements.  Roanoke Island was the very first English settlement that happened within a decade of Columbus discovering this new continent.  (Or rediscovering depending on your take!)  Sadly, all the people were gone when the leader returned back from England from getting help.  But that is a topic for a different blog.  Eventually another group arrived to the “new” land.  Jamestown was started in 1607.  Because some settlers did survive, Jamestown is considered the first permanent settlement.  Hard to believe that over 400 years have passed since that 1607 beginning. 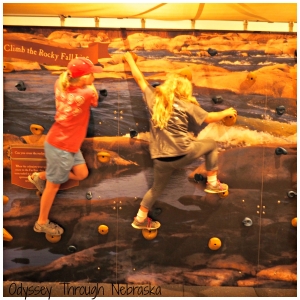 What is great about this exhibit is that rather than quoting history, visitors get to get experience history.  American Adventure 1607 recreates some of the experiences the early settlers would have had.  Obviously there is a bit of play acting – trying to hunt inside the museum would not go well.  But you can choose to try to cross the rapids using hand holds.  And you can answer questions that helped to tell you whether or not you would have survived. What is also fun is that you are given a nametag with the name of the one of the original settlers.  At the end of the exhibit, you can see if your settler survived.  Hint: most of them did not survive. 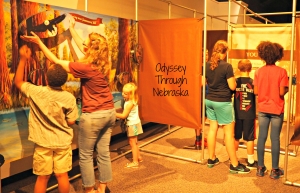 eat about this exhibit is that there really is something for the whole family to enjoy.  Although there are some physical feats such as the “waterfall climb” and a short zipline over pretend rapids, most of the exhibit is about plotting and thinking.  There are a few routes to take, and several methods to try.  Our kids easily spent an hour enjoying the exhibit.  The elementary school age students spent the longest amount of time.  They wanted to try every possibility.

What is also rather fun about the American Adventure 1607 exhibit is all of the photo possibilities.  At the end they have a display with signs that visitors can show for the perfect photo opportunity.  Because the signs are reversible, guests can pick whether to be optimistic or realistic about their survival chances.  Everyone who finishes also gets a sticker.  Who wouldn’t want to wear around a sticker that says “Be Nice to Me, I’m Dead.” 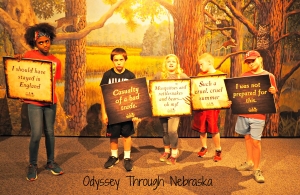 This exhibit will only be at the Durham through the end of July.   This is the perfect destination for small groups as my children definitely enjoyed finishing with friends.   Plus what a great way to collaborate!  Too bad those early Jamestown settlers did not have some of the knowledge that we now have today.  Thinking through the best options would have helped more settlers survive in 1607.