Back Cover Stories: A History Lover’s Guide to Lincoln

Back Cover Stories: A History Lover’s Guide to Lincoln

Both of the back cover pictures on 100 Things to Do in Lincoln reflect two different parts of Lincoln stories.  Taking these pictures were memorable. Both experiences make me smile. 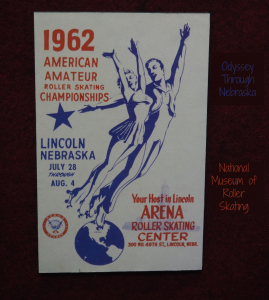 I have visited the National Roller Skating Museum several times. Rhonda was the one who pointed out different artifacts to my last summer. Displays change frequently, but I have a feeling this ticket frequently stays up. This was the ticket from the very first national roller skating championships that happened in Lincoln. Thanks to our city’s hospitality, they held many subsequent events here. Plus later, they moved their national organization to town. Thankfully Rhonda nicely opened the glass case, so that there was not any glare from the glass. 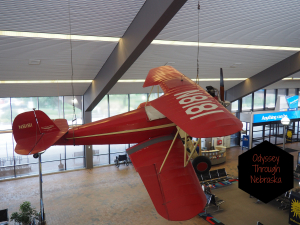 Picture # 2 was a little more complicated. First of all, you cannot waltz into the airport camera in hand. In advance, I arranged to come take a few pictures. Security escorted me around. Of course, I ran into someone I knew.  I made a point of emphasizing that I was not in trouble at all. Thankfully these friends knew that was the case.

This is a 1929 plane that was manufactured in Lincoln. Determining the picture angle was also challenging. I needed to avoid people. (Hint: some are hiding behind my logo). Plus I wanted the best vantage point of the plane. Eventually I ended up switching views. Taking a picture of the front of the plane was much better.

After the photograph session, I actually spent several hours at the airport in their conference room.  Devoted employee(s) collected newspaper clippings about the airport for decades. Most of them are contained in scrapbooks. So I read and skimmed through many, many articles. I did find a few fun stories that made their way into the book.

In case you would like to learn more about the hanging plane, here is the plaque that is found at the airport. 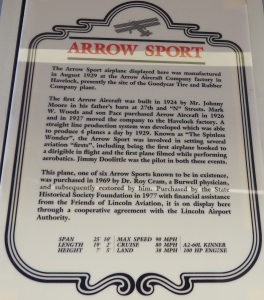 One other fascinating fact is the timing of creating the back cover copy. At least for nonfiction books, the words that are found on the back are written before most of the manuscript. Thankfully I am able to edit the text later on since a few of my details changed during the research process. Since the text might be tough to read, here is what the back cover says.

Dramatic change accompanied the growth from a village of 30 settlers to a city of 300,000. Today, Lincoln retains the residue of its fascinating past for those who know where to look. Tour Lincoln’s stories heritage through its contemporary geography, charting the arrival of the university, penitentiary, asylum and railroads. Learn how the early churches still anchor the community. Discover the five towns that later merged into Lincoln. Visualize the artwork that best reflects Lincoln – both the person and city.  Locate where Lindbergh learned to fly. Revisit the downtown Lincoln scene of what was once the the largest bank robbery in the United States. Picture the once thriving Capitol Beach Amusement Park. Explore Nebraska’s capital city in the expert company of Gretchen Garrison.