While researching my book, A History Lover’s Guide to Lincoln, I made a surprising discovery. Preparing for the 4th of July was a different process in early Lincoln. Buying fireworks could happen at some unusual stores.  Newspapers.com was a HUGE source of information for my book, and I found both of these articles in that site. 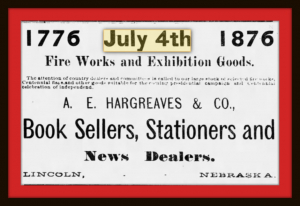 Another store that sold fireworks was A.E. Hargreaves. This company sold to book sellers and stationers.  Somehow I do not see paper and fire working well together. Source: The Nebraska State Journal  Jul 06, 1876 · (I am really not sure why they were advertising fireworks after the 4th of July. Maybe there was not a time limitation for displays?

Gillen and Boney was an early wholesale candy store in Lincoln. They were known for selling a variety of sweet products. But around the 4th of July, they also sold “wholesale fireworks, flags and confectionary.” Evidently they wanted their store to be a “one stop shop.” Treats and nighttime displays were sold.

I also found an article telling more about what displays were like back in 1896.  According to the Lincoln Evening Call back on Wednesday July 15, 1896, “The Fireworks Display Was Greater Than Usual This Year.”  This was “on account of the presidential campaign.” (Pretty certain that is not going to be the case this political year!)

Back then, Japan, China and New York’s Staten Island were the notable firework factories. Official recipes were top secret. But the reporter was able to determine that ingredients included gunpowder, saltpeter, charcoal and meal powder.

“Automatic set pieces” were popular. A figure rode a bike. A donkey kicked. A jack jumped. Each one cost $10. Supposedly one could buy a great display for $6.50. Evidently that did not include set pieces.  If buyers wanted to go all out, the work entitled “Agriculture” was available for a bargain price of $1,350.  Bombs were available for daytime fireworks. Water fireworks were also a thing.  For a complete exhibition, communities could pay from $300 to $700. I am guessing that price tag is a bit more steep today.