Tonight the Huskers are playing in their first football game of the season.  The timing of this post seems fitting since it was the day of the first Husker game last year that I got home from my 1,700 mile Nebraska trip.  Now I am getting to show all of you the cover of my book.  Over half of the pictures were taken during those 4 days of traveling. 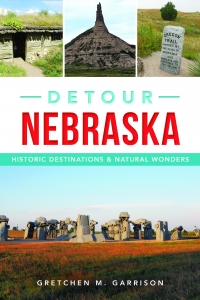 I already told you about the Carhenge picture earlier, but I thought it might be fun to tell you more about the other pictures that are featured as well. 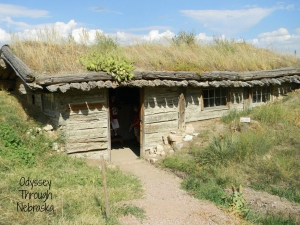 This picture was actually taken on our Northwest Nebraska family trip that we took four years ago.  Between the six people in my immediate family, my parents, my sister & her husband plus my brother & his wife, there was a bunch of us that caravanned out there.  If you look carefully at this picture, you can see our two oldest standing in the doorway of this dugout.  Found at the Fur Trade Museum outside of Chadron, this is the re-created trading post that was once on site.  My admiration goes out to anyone who was able to call this dirt dwelling home.  If you have never been to this museum, it is one of my favorites.  In fact, I have written about it several times on this blog. 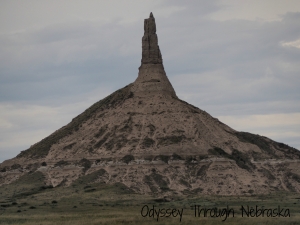 Doesn’t it seem like I am quite close to Chimney Rock?  My specialty zoom lens was definitely worth it when it came to this particular photograph.  In realty, I was far from this significant Nebraska monument.  I was still at the visitor’s center.  Once upon a time, visitors could walk right up to the monument.  In fact, many pioneers even carved their names.  But thanks to erosion and human contact, this monument continues to erode and shrink away.  So now a fence provides a barrier that stops anyone from getting to close.  Hopefully the protective efforts will allow this landmark to be enjoyed by others for many, many years to come. 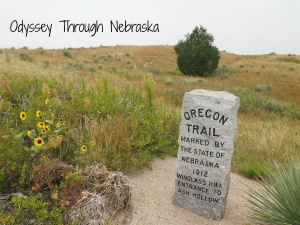 This location was one that I did not even know about before my 2016 trip.  While I did plan on visiting the Lewellen area, I had not heard of Windlass Hill.  At the Ash Hollow visitor’s center, the volunteer told me that traveling wagon trains may have used a special windlass device to help get their wagons up the steep, rolling hills that are found in this area.  This spot is a few miles away from the state park.  To get up the hill does require a bit of a steep hike.  The path is paved, and the views from the top are spectacular.  Seeing this monument at the top was definitely a bonus.  The rugged landscape still shows some evidence of those who passed by long ago. 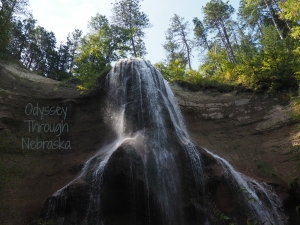 At the moment, the only image I have of the back cover is in a PDF file.  So, you will have take my word for it that the next two pictures are on the cover.  This photograph features Smith Falls near Valentine.  And the reason why I have such a great view is because of the fact that I did take the picture from the waterfall pool.  Thankfully other visitors were exploring at the same time.  I am not sure that I could have made it up the steep, slippery steps back up the path without getting myself (or especially my camera) wet.  (If the exploring Dad who helped me happens to read this blog, thanks again for the assistance.)  I do think all Nebraskans should visit this beautiful, breathtaking place! 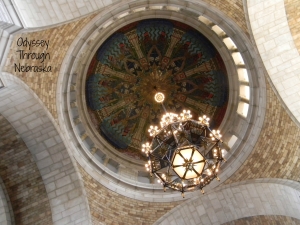 This picture was taken when I was on a field trip with my kids a few years ago.  The docent asked everyone to lay down in the center of the rotunda area and look up. Since I was wearing jeans, I figured why not?  Thankfully I had my nice camera along.  Even better, I actually took the time to take pictures.  What resulted is one of my favorite shots ever!   This picture confirms that the Nebraska capitol is simply breathtaking.  The detail even on the ceiling is unreal.  If you have never taken an actual tour of the Nebraska capitol, I would highly recommend the experience.

I hope you enjoyed learning more about the pictures that I used on the cover of my book.  While I will probably not have a “text reveal,” I do plan on telling you some of the behind the scenes stories that happened during my travels and during the writing of the book.  Until then, go Huskers (and Happy Labor Day on Monday!)