One of the most iconic early Nebraskans was a renaissance man.  In fact, if you look at the below resume, William F. Cody (Buffalo Bill) definitely had an impressive list of accomplishments. 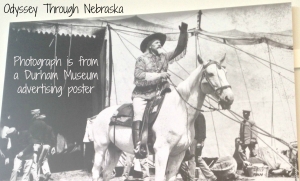 What do you do when you have lived a life full of adventure and excitement?  Why of course, you start your own traveling show to tell the world about your experiences.  Born with a restless spirit, William Cody did not seem to be able to stay put for long.  In1882, he was put in charge of North Platte’s 4th of July show.  Bill’s Old Glory Blow-out included the hold-up of a stage coach, buffalo being hunted and wild bronco horses being ridden.  The audience was thrilled, and their response thrilled Buffalo Bill.  He foresaw that would finally be able to combine his many loves of adventure, action, heroism, history & the outdoors into a money making venture.  Less than a year later, his first Wild West Show began.

Five “scenes” of every show:

Despite the fact that this was before the true age of special effects, they managed to include stampedes, cyclones and prairie fires.

While my daughter may not have appreciated all of those antics, she would have loved watching Annie Oakley in action.  She joined the act in 1885 and stunned crowds with her ability to divide a playing card from a distance away.  Simply galloping across shooting glass balls was far too easy for her.  Instead she shot the balls looking over her shoulder, using a mirror as her guide. Her sharp shooting thrilled audiences.

Sitting Bull, a former enemy of Cody, even joined the entourage for awhile.  His promise of being given a front row seat to watch Annie Oakley’s daily shooting expertise persuaded him.  But he soon tired of the less-than-welcoming crowds who were not too certain of this “retired” Indian chief.

For a combined total of almost 30 years, the Buffalo Bill Wild West Show toured the country and even went to Europe.  They performed for Queen Victoria who had not ventured out to a theater production in 26 years, having been more secluded after the death of her husband.  She asked for a repeat performance, and the next time Bill added the kings of Denmark, Greece, Belgium and Saxony to the stagecoach part.  Along with the Prince of Wales to honor England of course.  His show was enjoyed by audiences everywhere!

While I can no longer take my children to his live show, I do hope to take them someday to Buffalo Bill Ranch State Historical Park.  They will at least be able to see his former house and part of his land, as well as to learn even more about William Cody, the man usually known only as Buffalo Bill.  But, more about him is a column for another day – he definitely lived a fascinating life.

Here are the books I researched for this topic …

My favorite non-fiction book was published in 1952 and reads like a storybook.  Buffalo Bill by Ingri & Edgar Parin d-Aulaire is beautifully illustrated as well.

This cover picture was copied directly from Amazon where you can still purchase the book today.

If you enjoyed learning more about Buffalo Bill, you would enjoy reading the historical fiction book entitled Unbridled Dreams by Stephanie Grace Whitson.  This fictional account of a young woman who joined the Buffalo Bill Wild West Show was what initially compelled me to want to learn more about William Cody.  Your best bet to find the book is probably your local library since it was published several years ago, although you can obtain some copies still from various places online.