A Whistle-stop Tour Across Nebraska on the Nebraska 150 express

A Whistle-stop Tour Across Nebraska on the Nebraska 150 express

With 24/7 news coverage, sometimes we can forget that newsworthy people were not quite as accessible.  Newspapers were not as common.  What stories were contained inside might have happened days or weeks ago.  Politicians had to take a different route too.  To present their perspective to people, politicians would travel to them.  One way that they did this was to plan a “whistle-stop tour” across the country.

Those with a message to get across would travel by train across the country.  They would make speeches and try to draw crowds in order to persuade them to support their campaigns for office.  At the Nebraska History site, these are the campaigners who stuck out to me on my initial examination.

From my previous research, I knew the identity of one such campaigner.  William Jennings Bryan was the most famous Nebraskan to participate in the whistle-stop campaigns.  During his three unsuccessful Presidential runs, he crossed the country multiple times.   As the “Silver-Tongued” orator, Bryan drew people from miles around to hear his message.

Theodore Roosevelt’s train trip lasted 4 days in Nebraska.  He was campaigning for Vice President then.  But soon, due to McKinley’s assassination, he would find himself leading the country.  He was immensely popular in Nebraska.

By the 1950’s trains were still a popular way to connect to the people.  Candidate Eisenhower also traveled across the state.  One man who accompanied him was the famous Nebraska newspaper man, Homer Gruenther.  He helped soon to be President Eisenhower with his speeches.  Yesterday’s post recalled days gone by when the North Platte Canteen made an impact from the train depot.  A decade later, trains still were linking people into the mid-century.

To celebrate this connection, the Nebraska 150 commission has planned a special whistle-stop event to again connect people across the state.  Even though like long ago, the trains are closed to passengers, still there are special activities planned at each stop along the way. 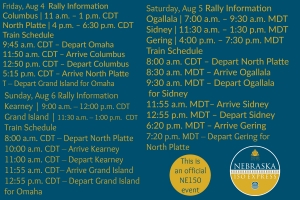 This three day event will be happening the first week-end in August.  Governor Ricketts, the First Lady and their family will be some of the passengers.  Additional people will be announced soon.  If you are near any of the stops, you will definitely want to make a point to visit and see the train.  To learn more, please visit The Official Nebraska Express page on NE150