Haymarket Hearts: Another Edition of Nebraska by Heart

Home/Haymarket Hearts: Another Edition of Nebraska by Heart
Previous Next

Haymarket Hearts: Another Edition of Nebraska by Heart

I have always enjoyed going down to the Lincoln Haymarket.  There is something about this area that is one of the original parts of Lincoln that draws me in.  So to get to see the Haymarket Hearts was another fun adventure for me and my daughter.   The backdrop for these beauties was often brick which is prevalent in this part of town.  I hope you enjoy seeing these Haymarket Hearts as much as we did.

This heart was in front of the From Nebraska Gift Shop.  I thought that was a fitting placement for a heart that clearly reflects a beautiful part of Nebraska. 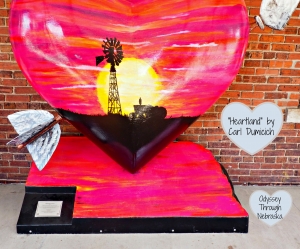 Along P Street, you could see four hearts.  The first one was up a bit further closer to 9th street.  Since “Significant Symbols of Nebraska” was done in black and white, the drawings stand out.  The inset picture shows part of the symbols that could be seen on the back side. 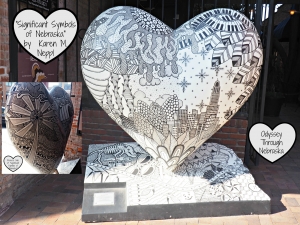 Then further down P Street, there were three hearts in a row.  First, “Polar Opposites.” 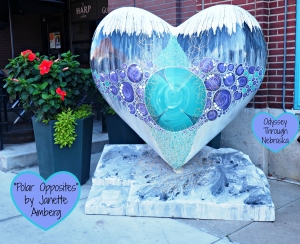 Then this one of the Haymarket Hearts was actually added a bit later.  You can see the footage of it being unveiled if you click on the link to the  Nebraska by Heart Facebook Page.  Since my Grandpa was a farmer, I really liked the front of “Titled Dreams Become Destiny.”  Although I am not sure that he ever had ambitions of traveling to the moon, the reverse side is equally impressive. 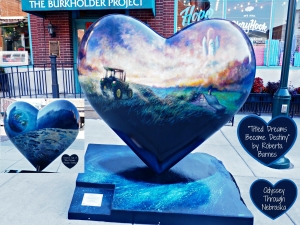 The last of the Haymarket hearts along P Street is a tribute to the Omaha Zoo.  I liked how this artist brought a bit of Africa to Nebraska. 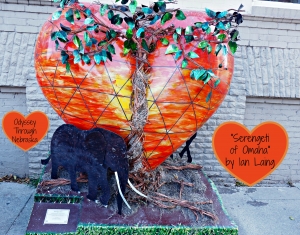 The reverse side of the heart was equally impressive.  Since the heart in its original setting was almost flush to the wall, I could not get a great picture.  So this photograph was taken at Haymarket Park when the heart was moved there before the auction. 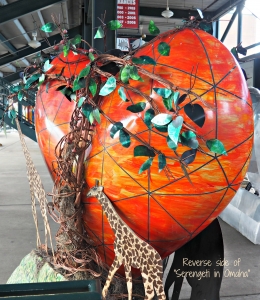 This last heart was technically found outside of the actual Haymarket, so maybe it should not count as one of the Haymarket Hearts.  But since it was in front of the ballfield at Haymarket Park, I thought it counted.  As you maybe know, our boys play many baseball games during the summer.  MANY!  So, I really liked this “Out of the Park” heart that was in front of the stadium.  Whenever we went to watch the Saltdogs, I did not have my nicer camera along.  Rather than using one of my cell phone pictures, I took a new picture of the heart when it was moved inside of the stadium. 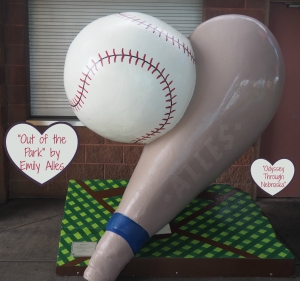 I hope you have enjoyed seeing all of the Haymarket Hearts!