Home/Lincoln Railyard plus Airport Nebraska by Heart Art
Previous Next

Although the new Railyard area has only been a part of Lincoln for less than five years, when you wander around the area, somehow this part of town seems more established.  And although the two areas are still a drive apart, combining the Railyard plus Lincoln hearts seemed to make sense for this post.  Of course, the Railyard locations were all within a few blocks of each other.  The airport ones were a bit farther apart.

Right across from the Railyard area is the first heart.  The point of this one is the impact that we make on each others’ lives.  I know that I like looking back to see the patterns and paths that come from community. 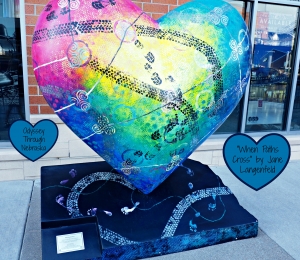 Next to the patio/ice rink area is a bright and colorful heart.  If we all lived according to these words, life would be much happier for everyone.  The colors and sentiment are inspiring. 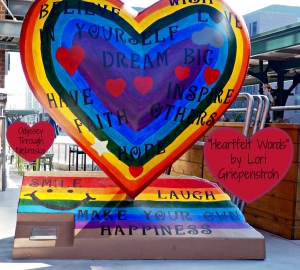 The next set of Railyard plus Airport hearts are located closer to Pinnacle Bank Arena.  While farming is often emphasized in Nebraska, we can forget about the ranchers who have an equal impact.  That is why I am glad that this heart highlights the part that they have played in our state. 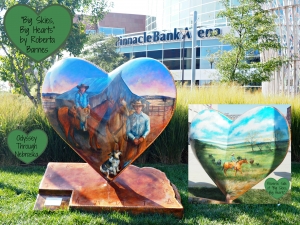 In front of the downtown post office are three hearts.  The first one is rather imaginative.  Seeing inside of a rainbow would be quite an experience.  If that were possible of course. 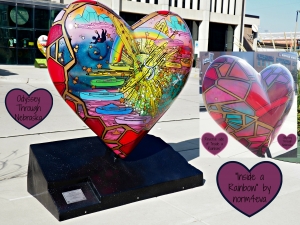 Adjacent is one of the hearts that was added later.  I appreciate the vision that this artist had in representing many of the different cultures represented in this state.  Since the faces are blank, we can picture ourselves in the images. 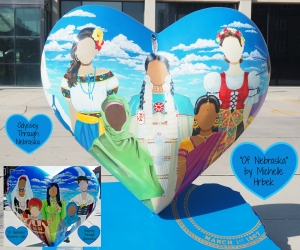 The heart closest to the post office reminds me of a Grandma Moses painting with Nebraska images.  I am glad that we peeked on the reverse side.  Don’t you love the friendly cow that dominates the picture? 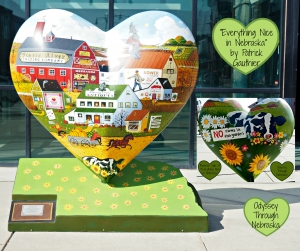 On the corner past the post office you will find a heart that typifies what I think of with Nebraska.  Corn is one of the heartbeats of our state.  I love the combine on the base and the kernels that seem to be ready to pop. 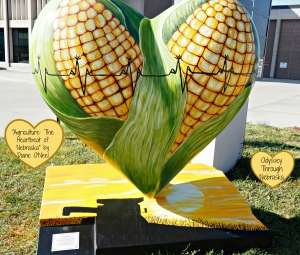 Down the street in front of the Sawmill Building is a heart with a striking color scheme.  The jewel pattern in the front with the actual diamond pattern on the back was clever.  Climbing the steps to see this one up close was definitely worth it! 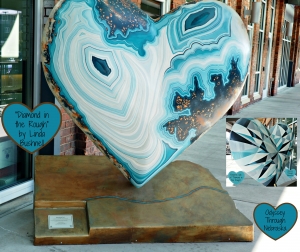 No, I did not forget about the airport hearts.  When my daughter and I went out to see these hearts, they were in the process of moving one downtown temporarily.  The guys doing the transporting nicely tried to hide behind, so that I could get a picture.  Thankfully I was able to get permission to go down early to the Haymarket to get a better shot.  If you want to see this heart in its original setting, as opposed to on a vehicle, you can look at the Nebraska by Heart Facebook page. 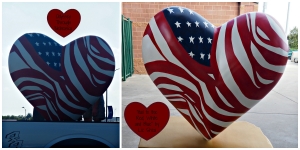 The final Railyard plus Airport heart is near the airport drop off area.  I thought the combination of symbols that identify both the plains and plane was rather clever.  Which side is your favorite side? 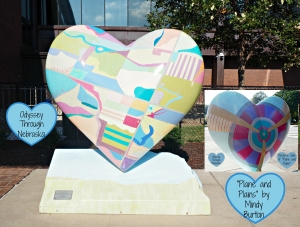