Husker Hearts for Nebraska by Heart

Home/Husker Hearts for Nebraska by Heart
Previous Next

Husker Hearts for Nebraska by Heart

I was born on a Husker football Saturday.  If you are not from Nebraska originally, this statement does not make sense or carry very much weight.  But if you were also born a Husker, I bet you get why that matters.  The football part is significant, yet what is more significant is the tradition.  That is why I am so glad that my kids and I were able to go see the Husker Hearts from the Nebraska by Heart project while they were still in front of Memorial Stadium.  While many of the Nebraska hearts appealed to me for many reasons, these three hearts were definitely my favorite collection. 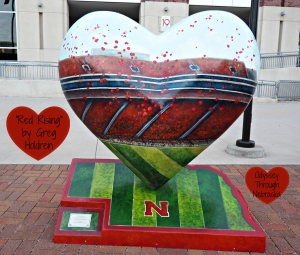 If you have ever attended a Husker game in person, you can picture the tradition of the balloons rising to celebrate a touchdown.  I think that artist Greg Holdren’s use of “Red Rising” for his title was quite clever.  Like I said, while the touchdown part is significant, equally as important is the thought of rising up from the challenges that come your way.  This first of the Husker hearts captures a moment that fans experience at every home game. 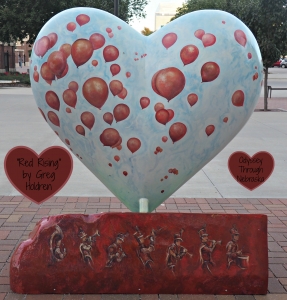 I learned from watching the unveiling video that Mr. Holdren was a longtime art teacher.  Evidently one of his students also had a heart featured in this project.  Yet another example of encouraging others to rise above the limits that we can put upon ourselves.  Evidently the original base sketches did not include the band members.  They are  only visible from the back of the heart.  That is definitely a fun tribute to the young men and women whose music inspires all of us to rise up to our feet. 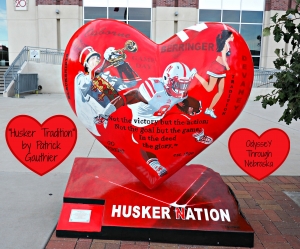 I was in college at the same time as Brook Berringer.  I remember watching him play.  Then I remember finding out about his plane crash on a sunny day in April.  A life seemingly cut short is always hard.  I am glad that his name is included in the “Husker Tradition” heart.  As well as Tom Osborne, the football coach who will probably always be a fan favorite.  For the unveiling of this heart, Osborne did the honors along with Berringer’s sister.  That added even more meaning to the heart.

While this one of the Husker hearts invokes a bit of sadness, this heart is also a reminder of what the Huskers stand for.  This heart also represent the college aspect Husker nation since the band and cheer squad are included along with the football player.  I have a guess as to which player that is, but I won’t speculate here.  🙂  Evidently the artist who created this heart is a Nebraska alumni.  So he also gets the proud tradition of Husker football. 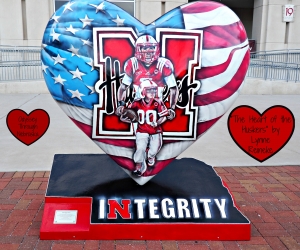 The last one of the Husker hearts is entitled “The Heart of the Huskers.”  If you get a chance to watch the unveiling video (that will be linked at the bottom of the page), you will enjoy hearing the artist’s vision for this heart.  She also recognizes that the point is not only football.  That being a Husker involves more than passing a pigskin.  This is evidenced by the word “integrity” on the bottom of the heart.  The message might be seen even more on the back of this heart. 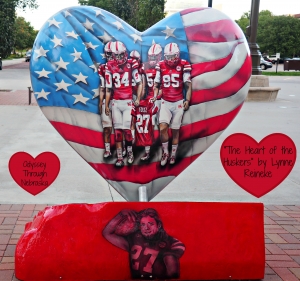 Last year before the start of the season, senior kicker Sam Folz was killed in a car accident.  This Nebraska young man had grown up in the state with the hope of being a Husker someday.  His dream came true.  As a fan, I appreciated the way that the focus of last year’s season was to continue on in the how he lived.  His slogan was “Dream Big. Work Hard. Stay Humble.” His calling was far beyond a game.  And we can all learn from that.  This heart was a fitting tribute to this young man whose life made such an impact in such a short time.  The Folz family was on hand to unveil this heart.  I am sure that must have been a bittersweet moment for them.

Click on this link to see these Husker hearts unveiled.  The video is almost 20 minutes long, so I give you my permission to not watch the whole thing.

This is the last installment of my Nebraska by Heart series.  A big part of what made this adventure fun for me was that my kids were along for the ride.  Each time I would include them in some of the pictures as they identified which hearts were the most meaningful ones to them.  While most of those pictures will never make it online, for me it was fitting to end with a picture of two of my kids with their favorite hearts.  “Nebraska by Heart Huskers at Heart.” We loved this public art project and were sad to see it come to a close. 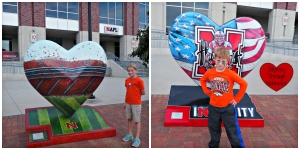