Being able to bring history to the present is one of my favorite things about teaching and about writing.  Explaining the past in a way that matters today is crucial.  Discovering Nebraska’s roots is a fascinating process for me, and that is just one reason why I am excited to start my new “Nebraska Counties” series.  I recognize that most readers are limited by time or even resources to complete research by themselves, so I am hoping to take a step out of the process.  May this collection of posts on each of the Nebraska counties will be relevant and fascinating to all who read the series.  To begin, an overview of the Nebraska counties will be helpful. 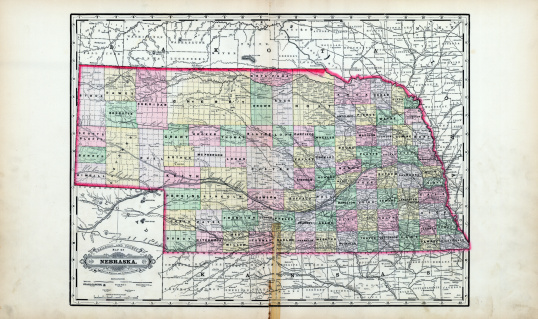 First of all, Nebraska does have ninety-three counties.  When the Nebraska territory was organized in 1854, eight regions/counties were recognized.

One of these county names would eventually disappear altogether (hint: number 7).  Boundaries would definitely change for the rest.  But it was a start.  Forney became Nemaha County.  According to Wikipedia (the site to find all factual information!), Otoe and Nemaha (instead of formerly Forney) were also included  since but personally I think that the “Mapping Nebraska” in the Nebraska History magazine by Brian P. Croft is more accurate.  Since Omaha was the capital at the time, the fact that its county (along with a few surrounding ones) were included as originals makes sense.

By 1861, Nebraska already had forty-one counties.  Thanks to the Civil War, some counties were eventually renamed for famous generals and soldiers.  Perhaps the most interesting story is the fact that evidently the Colton map company decided to get a jump on the competition by printing a Nebraska map before the counties became official.  This map was considered an authority even though Lyon, Taylor, Monroe, Harrison, Jackson and Grant counties never came to be.  I take that back – Nebraska does have a Grant County today, but the location is north of the original one.

In 1889, Thurston and Hooker became the last two official counties, so the Getty Images Nebraska state railroad map inserted above should be fairly accurate.  In 1922, each of the Nebraska counties were numbered based on the amount of registered vehicles each county contained.  All of these numbers are still the same today, although due to the sheer number of vehicles in the three most populous counties (Douglas, Sarpy and Lancaster), the county names are printed on the bottom of plates to allow for enough numerical combinations.

To give you the history of each individual county, I plan on using Perkey’s Nebraska Place Names for background information.  To keep these posts up-to-date, I plan on telling you about the places that you can go to visit today in each location.  By featuring 1-2 counties per week, this will take about eighteen months.  Don’t worry – in case you do not have any interest in this series, I will still have some extra columns about current events and locations as well.  Later on this week, I will introduce you to the first county named for the second President!  The alphabetical approach will help us move around the state, rather than getting stuck in one particular region of Nebraska.

Please click here to see the list of the Ninety-three Nebraska counties.  Actually this link will also tell you about all of the Nebraska cities and villages as well! 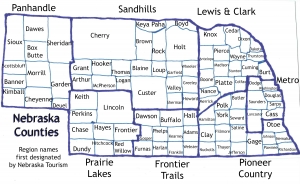