Home/Adams County in Nebraska
Previous Next

Established February 16, 1867, by the Nebraska Legislature.

The History of Adams County

n February 16, 1867, Adams County became a part of the Nebraska Territory,  just two weeks before Nebraska became a state.  Named for the second President of the United States, you can find Adams County in the south central part of the state.  The county seat is Hastings which replaced in Juanita in evidently a bitter election battle back in 1878.

There is a bit of discrepancy between which name the town held first – Rosedale, which only lasted about 3 years or Sportville, named for a popular baseball team, which  lasted 2 1/2 years.  No matter which name you call the town, it can no longer be found.

Leroy (named for the son of A.H. Stone) was the place to relax and unwind in the county due the proximity to the River and numerous boats plus a dance hall.  That is until 1904 … The post office was moved to Pauline, which had formerly been Kingston.  Pauline gradually faded from prominence as well, but you can click on the links to read even more about these former towns.

Hastings was named after Col. D.T. Hastings of the Grand Island and St. Joseph Railroad who had brought the railroad to the town. 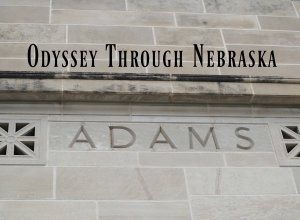 Hastings, as the county seat, is definitely the city to visit in Adams County.  In fact just about everything to do in the County seems to revolve around Hastings.  During the past several years, my family and I have spent more time in Hastings.  Since my aunt and uncle live there, that has been a great excuse to visit.  I have enjoyed featuring possibilities in this town several times.

One of the best family festivals in Nebraska happens every August in Hastings – Kool-Aid Days!  How can you not love a celebration featuring the state’s official drink?   Although the big celebration only happens once a year, you can visit the Hastings Museum year round to learn just how this sugary drink got started.

Kool-Aid Days and the Exhibit at Hastings Museum

The Hastings Museum has much more than just Kool-Aid.  This post featured some of the older exhibits found in the Museum.  Within the last year, they have opened a brand new exhibit on Central Nebraska habitats and farming.  At some point, I will manage to get pictures up about this excellent interactive room designed with kids in mind.

For the younger set in Adams County, there is a great Children’s Museum.

We also discovered a favorite park in Hastings – the Brickyard Park.

Saturday in the (Hastings Brickyard) Park

Last week when I was in Hastings, I stopped by this lovely coffee shop again to enjoy a great cup of coffee and a croissant breakfast sandwich -yum!

For historical background information, I have used Perkey’s Nebraska Place Names by Elton A. Perkey.  The Nebraska county map is public domain.