Home/Butler County in Nebraska
Previous Next

Butler County was named for a man who possibly never set foot in Nebraska even though he was asked specifically to do so.  Still a well-known Kentuckian, General William O. Butler first found fame in the War of 1812.  Throughout his lifetime, he served in both the state legislature and Congress.  He found fame again in the Mexican War.  Although he was appointed territorial governor of Nebraska, he declined the offer.  Earlier in 1844, he had tried unsuccessfully to become governor of his own state.  Maybe he had had enough of politics by this point. 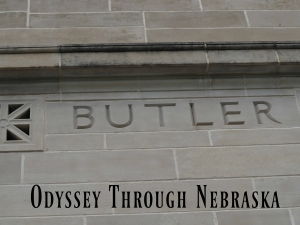 Pepperville.  At one time, Hubert Pepper had his own place.  Kind of sad this town went away.  Wouldn’t it be a cool town to write on an envelope?

Savannah … Former county seat located on the old Gardner Ranch.  Named for a town in Georgia.  Or in Tennessee.  Or in Missouri.  Evidently the town’s exact origin is no longer known.

Brainard was named in honor of David Brainerd, a well-known missionary to the Indians.

Garrison.  As you can imagine, my kids get excited when we drive by this town.  At some point, I want us to take family pictures by the town sign.  For now, just know that this town has a great name and was named for a great man.  William Lloyd Garrison championed the cause of freedom in the Civil War.

Rising City.  Two brothers ran an area store and got the name nod.

Surprise – this land is better than we expected.  Surprise – the town still exists, even though it is quite small. 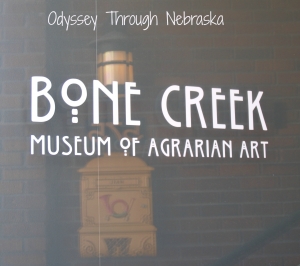 A wonderful Nebraska place to visit is the Bone Creek Museum of Agrarian Art.  What I love about this place is the fact that they have rotating exhibits that feature agriculture.  While not all of the artists or art featured are actually from Nebraska, all of them have created at least one piece that reflects the art of agriculture in some way.