Growing up, I enjoyed at least one ice cream social at my church every summer.  This event did not feature a big tub of yellowish ice cream topped with squeezable brown syrup.  Definitely not!  Tables were covered with silver crocks of homemade deliciousness.  Several variations of vanilla, strawberry and chocolate and even homemade peach, to name a few that were served.  Plus you could go back and get more than one bowl.  (That’s important when you are a kid and maybe an adult too!)  Pleasant yummy memories for all who were involved.

The first noted ice cream social in our state did not go over quite so well.  In fact, because of one simple dessert, the location of our state capital was changed.  (That and an abundance of bugs but that part will come later).

The whole situation had been compounded by whether you lived north and south.  Back then, the Platte was the dividing line.  If you lived north above that river, you had probably been against slavery, and those below the line had usually been in favor of slavery.    The South Platters actually tried to join up with Kansas for a bit, but their request was ignored, so they stuck with Nebraska.  Since Nebraska became a state in 1867, the Civil War was still on everyone’s minds and still was the cause of many a discussion (ahem, arguments!)  Which sometimes involved name calling, revolvers, shotguns, and … mop handles?  They did agree on one thing: a new capital must be chosen.

Much to their chagrin, the citizens of Omaha had not done enough to keep the capital there.  With high debt on their government buildings, many people felt Omaha had really not brought anything to the table.  Plus Omaha was decidedly north, and by then, more people were living south of the Platte.

Three towns were considered.  The first was eliminated after one night – Ashland’s proximity to river bottoms resulted in an overabundance of mosquitoes.   Pesky today – pestilence back then.  The other 2 towns: Saline City (also known as Yankee Hill) and Lancaster.  Yankee Hill was the obvious choice – better location above the flood plain with easy access to wood and salt flats, plus more people.  All Lancaster had was the potential salt flats industry and some land that the Methodists promised to donate if the capital came to town.

On to the ice cream …

John Cadman, a prominent Yankee Hill citizen, was determined to clinch the capital for his town.  So, he asked his wife to prepare a feast to impress the committee on the last day.  She enlisted help from the community, and they all dined fine.  Fried chicken and ice cream.  The first ever reported in the state.

Back before the days of plug-in machines and even the hand crank ones, ice cream making was quite tedious.  Ice was sawed from ponds and stored in sawdust for warm weather use.  Ice cream would have been a frivolous use of their supply of ice, especially during the hot late summertime.  In addition, they probably would have had a limited supply of sugar.  Plus the whole process to cool and freeze the cream would have been so time-consuming and arduous.

The committee was notably impressed.  Both with the first noted ice cream dessert as well as with the host and his kindness.  But perhaps Cadman’s hospitality went a bit too far.  In the end, they decided that Yankee Hill’s considerable efforts constituted bribery.  So, Lancaster became the first capital and promptly renamed the town, Lincoln.  (In a last-ditch effort to keep the capital, an Omaha Legislator had proposed the name of “Lincoln.”  Since many South Platters had been pro-slavery and anti-Lincoln, he thought that name would deter the southern Nebraskans.  He was wrong). So, the town of Lincoln was formally introduced on August 14, 1867.  All partially because of ice cream. 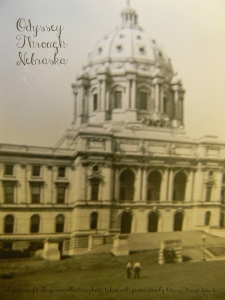 Note: I found out the majority of this information from Lincoln: The Prairie Capital: An Illustrated History by James L. McKee.  My expressed appreciation for his historical expertise!  I am hopeful that I was able to summarize this version for kids/families in an accurate manner!