All week I have been giving you previews of the some of the places that are featured in my Detour Nebraska book.  In addition, I have been telling you about other fascinating places that are not in my book for one reason or another.  Although I am a person of faith, to mention particular churches in my book would have been a disservice to others.  I did mention my church, the Upper Room in my acknowledgments.  But that is a bit different.

Anyway since we are following the chapter order from my book, today we are finishing up the Pioneer Country region and moving on to the Lewis and Clark region. Two Nebraska churches are included in the list of favorite places that I went as a child.  Although I loved attending First Free Church in Lincoln, when we visited grandparents, we went to church at their locations.

One of Two Nebraska Churches

One of my sets of grandparents farmed several miles outside of Aurora.  This community is a part of Pioneer Country.  Along with many other area family members, they attended Monroe Evangelical Free Church.  This church was actually started by some of my great-great relatives.

rowing up we often would head to the farm for the week-end.  Attending this church was always a highlight of my time spent there.  Now that I have my own kids, my husband and I have taken them to this church on occasion as well.  This church is far different from what it was when I was a child.  At that point, it was a typical country church.  The church has continued to grow and expand.  Exactly what you hope that a healthy church will do. 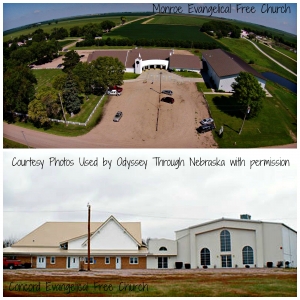 While my Mom grew up in Central Nebraska, my Dad grew up in Northeast Nebraska.  Although they lived in Laurel, my other grandparents attended Concord Evangelical Free Church.  This church has also continued to expand.  In the picture above, it is easy to see where the old building stopped and the addition began.  We also enjoyed visiting this church whenever we made the trek up north.  As a part of “Lewis and Clark Country,” this church was a place I have always felt welcome.

Why a blog post about these two Nebraska churches?

Although neither of these churches are mentioned in my book, they both played a part in my life.  Every time that we were in the area, we would detour to both locations.  While neither place is architecturally significant, they are both beautiful places to me.  This post is a reminder that even if a particular location may not be on everyone’s bucket list, they still can be worth the stop to you.