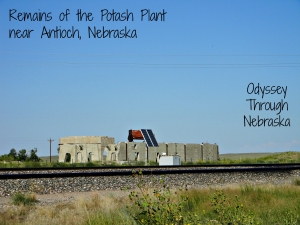 I am not exactly sure why the stone remains caught my eye.  Perhaps I noticed the Nebraska State Historical Marker instead.  All I know is that I made my husband stop the minivan out in the middle of nowhere on our September 2013 trip .  I had to know what the buildings once were.  (Yes, my husband is generally quite patient with my Nebraska detours.  Thankfully!)  I only stopped for a moment, but I was definitely intrigued.  I had never heard of a potash plant before.  This is 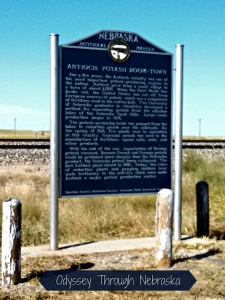 the text from the marker.

For a few years, the Antioch vicinity was one of the most important potash-producing regions in the nation. Antioch grew from a small village to a town of about 2,000.

When the First World War broke out, the United States was cut off from European sources of Potash, which was a component of fertilizer used in the cotton belt. Two University of Nebraska graduates in chemistry developed a method for separating potash from the alkaline lakes of the Nebraska Sand Hills. Large-scale production began in 1916.
The potash-producing brine was pumped from the lakes to reduction plants near the railroads. By the spring of 1918, five plants were in operation in this vicinity. Nebraska potash was used in the manufacture of fertilizer, epsom salts, soda, and other products.
With the end of the war, importation of foreign potash resumed. Because French and German potash could be produced more cheaply than the Nebraska product, the Nebraska potash boom collapsed. The last Antioch plant closed in 1921.

Today, the ruins of reduction plants and pumping stations bear mute testimony to the activity which once made Antioch a major potash production center.

Before that day, I had never heard of potash.  I did not realize that it was used in fertilizer.  I would have never perceived as a business.  All I knew was that I was glad that I stopped to take a look.  And that might have been the end of my short-lived fascination with the potash plant. 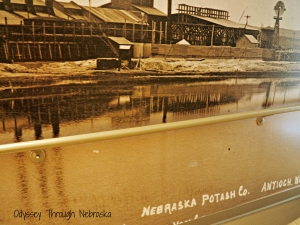 Except then I visited the Knight Museum and Sandhills Center in Alliance.  Three years later in September 2016, a picture caught my eye.  Yes, they do have several pictures on display of  the potash plant near Antioch.  Now I could finally see pictures of when the potash plant was a thriving industry.  Since Antioch basically became a ghost town when the plant closed down, all that is left is remains.

Learning more about the Potash Plant  …

Although I could try to summarize all of the function of potash and why potash plants are no longer needed, I am not going to do so.  Instead, I am going to send you to some online articles.  First of all, this is a sixteen page pdf from the Nebraska State Historical Society. This article is by Richard E. Jensen and is entitled “Nebraska’s World War One Potash Industry.”

Evidently the potash plant has been a recent fascination for another writer.  As I was researching, I discovered that Jim McKee, one of Nebraska’ foremost historians, wrote an article about the potash plant last week.  I am certain that his reflections would be far more insightful than mine, so if you have a moment, please read his article.