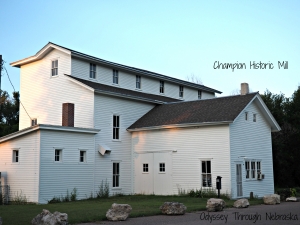 Near the south western edge of Nebraska is a mill that has been making an impact on the community for over a century.  This Champion Historic Mill was a key industry in its day.  The water powered mill has been kept up through the years and has a similar appearance from its early days.  Well, mostly.  Actually the original building burned down within a few years of opening.  But they quickly rebuilt it. 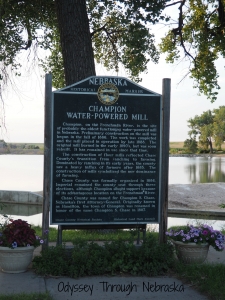 This is the Nebraska historical marker text about the Champion Historic Mill that explains a bit more about its early history.

Champion, on the Frenchman River, is the site of probably the oldest functioning water-powered mill in Nebraska. Preliminary construction on the mill was begun in the fall of 1886. The work was completed and the mill placed in operation by late 1888. The original mill burned in the early 1890’s, but was soon rebuilt. It has remained in use since that time.
The construction of flour mills reflected Chase County’s transition from ranching to farming. Dominated by ranching in its early years, the county saw a heavy influx of farmers after 1885. The construction of mills symbolized the new dominance of farming.
Chase County was formally organized in 1886. Imperial remained the county seat through three elections, although Champion sought support because of its advantageous location on the Frenchman River. 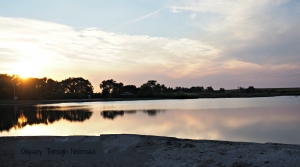 Long ago, the Champion Lake was the center of community life.  A pool house was once lakeside.  In the winter, visitors would come to skate the lake.  Today this lake is still a gathering place. This seems to be the favorite fishing hole for many people.  I know that if I lived closer, I would definitely be taking walks around the long.  The distance around is enough to take some time but short enough that you could easily complete a leisure walk in a few hours. 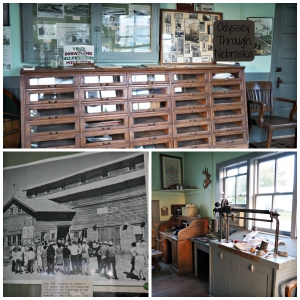 To learn more about the Champion Historic Mill, you can look at the displays.  The front room has been turned into a museum of sorts.  Cases hold memorabilia, and pictures line the walls.  This community has protected and preserved its history for generations to come. 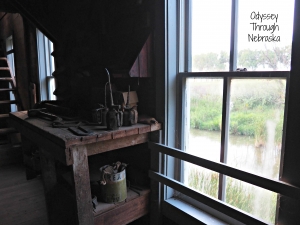 Besides seeing pictures of the past, you can walk through the mill itself.  Daylight was quickly fading the night that I stopped by.  But I could see enough of the equipment to get a feel for the history.

One of my favorite color pictures in the book was taken at the mill.  The daylight streaming through the window cast interesting shadows on this now silent equipment.  Many of the items once needed to operate the mill are still sitting around the shelves.

At one time, this mill was a Nebraska State Historical Society site.  Now the town of Champion and Chase County volunteers keep the mill open for the public.  Tours are offered on Saturday and Sunday afternoon during the summer. Or if you are driving by, one of the neighbors might be outside.  That is how I was able to take a tour on a random Thursday night.  To the lady who unlocked the mill to show me around, thank you.  If you had not done so, my writing on Champion would not have been as true.