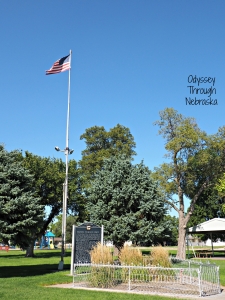 As I traveled across Nebraska, one thing that amazed me is how well towns have taken care of historical graves.  Although these people died long before even the current residents great-grandparents were even alive, the town still takes care of the gravesite.  This is definitely true in Indianola.

As you pass by the marker, you might assume that someone of significance is buried there.  While that is true, the remains are of a person you might not expect.  In fact, her name is not even known.  That is right.  The citizens of Indianola feel that this person’s life was valuable enough to still protect her grave over a century later.

To read the maker and learn more of the story, you do have to get out of the car at this Indianola park.  Here is the text copied from The Nebraska Historical Society.

The Republican Valley was the center of one of the major buffalo ranges of the Great Plains. It was a favorite hunting ground of several Indian tribes. Pawnee, Sioux, Oto and Cheyenne spent much time here as late as 1874. These tribal hunts, however, created problems, for they brought together tribes traditionally at war. The major encounter in this region was the Battle of Massacre Canyon, fought on August 5, 1873. It took place twenty-five miles west of here near present Trenton.

A thousand Sioux warriors surprised and defeated a Pawnee hunting party of 350 men, women and children, killing 69 of them. The Pawnee retreated to this vicinity, where they mourned their dead throughout the night.One survivor was a severely wounded Pawnee woman, whose child had been killed in the battle. A homesteader found her a few miles upstream and brought her here to Indianola, a frontier settlement established in 1872. The woman was cared for by the settlers until she died a few days later. A crude coffin was prepared, and she was buried on the banks of Coon Creek. Her body was reburied here in 1975 by the community during the American Revolution Bicentennial Year. Representatives of the Pawnee Indian Tribe took part in the ceremony.

If you are driving by Indianola, the stop is definitely worthwhile.  To find out more about this small Nebraska town, please visit the Indianola website.