Home/Blaine County in Nebraska
Previous Next

Boundaries established by a legislative act on March 5, 1885

Blaine County is located in the central part of Nebraska.  Named for James G. Blaine, who was an American statesman and 1884 Presidential candidate.  Being a part of the Sandhills means that towns are spread out, so Blaine County is the third smallest in population, having less than 500 people in the whole county.

The History of Blaine County …

During the early days of Nebraska, establishing the county seats was an important quest.  Competing for the honors were two towns, Ladora and Brewster.  To me this story that is found on the Nebraska Gen Web Project gives a lot of insight into early Blaine County settlers.

In a special election called for Nov. 23 of the same year, Ladora won by a majority of eighteen. The commissioners met Jan. 4, 1887 and declared the town to be the permanent seat of county government. They held their first session in Ladora on Feb. 22, 1887.    Brewster was defeated but not whipped in his fight to have his town declared the county seat. By devious wire pulling and unrecorded machination, he won in the general election of 1887 and in January of 1888 Brewster became the permanent seat of county government.   Ladora appears to have been executed instead of dying a natural death. All her business houses were moved to Brewster and the last residence went up in flames the following year. When it was evident to Ladora supporters that they were losing to Brewster, ninety electors of Purdum, Rankin and Brewster precincts signed a petition asking that the board of Loup County commissioners annex Blaine County territory to Loup. Western Loup County had recently lost a move to have Almeria designated as the county seat, Such an annexation would have resulted in a new election and Almeria would have been assured of victory. A counter-petition saved the situation and Brewster and Taylor have remained county seat towns to the present time.

Not sure if any of the officials in this picture were a part of the shenanigans, but I do think the fact that there is one woman is intriguing.  Evidently Miss Etta Brooks was the county superintendent.

Goldville.  Not named for the presence of the shiny mineral.  Instead named for W.H. Gould who was married to the first postmistress.  Despite her position, the U.S. post office misspelled the name of the town.

Continuing along with the post office love of misspelling, the town of Hawley was named in honor of Postmistress Mrs. Northrup, honoring her maiden name of Holley.  Yep – they really confused this one.

Brewster was probably named in honor of Civil War Veteran, George Washington Brewster.  He did build several buildings into town including a hotel.

Dunning was named in honor of two brother: R.A. and Sam.

Halsey is divided between both Blaine and Thomas Counties.  Named in honor of Halsey Yates, a Burlington Northern surveyor.

The unincorporated town with the most interesting beginnings is definitely Purdum.  At its founding, you would have found Purdum in Sioux County since at that time all of Blaine County was included in Sioux.  Then the post office was moved to Thomas County – not sure exactly if that meant the whole town or just the building.  Eventually Purdum did find its way back “home” to Blaine County. For even more stories on this county’s history, including some Native American and town founder adventures, please do visit the Nebraska Gen Website. 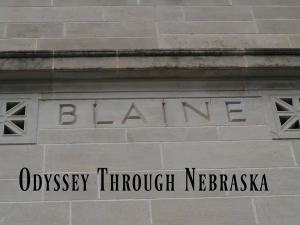 Of the original 20 towns found in this county, only 2 1/2 have survived.  Why they can claim 1/2 of a town is because Halsey can be found right on the county line and shares part of its village with Thomas County.  Purdum and Brewster have both survived.  What Blaine County is most known for today is being a part of the Bessey Ranger District in the Nebraska National Forest.  The feature image is overlooking Blaine County or at least parts – a bit hard to tell since county lines are verified now by GPS coordinates and map lines that are technically invisible to the eye.  Anyway, this is a beautiful part of Nebraska to explore – the hand-planted trees nestled among the Sandhills are a sight to behold.