Home/Brown County in Nebraska
Previous Next

Established by act of the state legislature on February 19, 1883.

If you happened to have any relatives  serving the state of Nebraska at the time of  founding of Brown County on February 19,1883, perhaps you can claim that this Nebraska county was named for one of your relatives.  At the time, at least two and possibly up to five state legislators had the surname of Brown.  Which one deserved the honor to be perpetually remembered is anyone’s guess.

Altai is a Latin word for high or elevated.  This was the name of the post office although more settlers possibly would have recognized the name White Cap.   Evidently a nearby sand hill was affected by the wind enough that the appearance resembled a white cap.

Pershing was named in honor of General John J. Pershing – a man who played a part in Nebraska military history and who made a big impact in World War I in the United States Army. 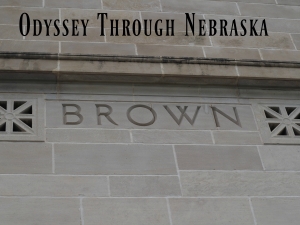 Ainsworth was named for Captain James E. Ainsworth from Missouri Valley, Iowa.   He happened to be the chief construction engineer of the Fremont, Elkhorn and Missouri Valley Railroad.

Johnstown has two name possibilities.  Possibly for Harrison Junction, a territorial legislator.    More likely, the nod goes to John Berry.  This homesteader used to run the mail stage coach from this area to Fort Niobrara.  In addition, Berry helped to bring the railroad to the county.

Not surprisingly, Long Pine is named for the is named for the trees lining the banks of this creek.  When my husband and I were dating, we spent a lovely week-end camping with a bunch of great friends.  I would post one of my own pictures of the trip except of course they are in print only since this was before the digital age. 🙂

Both Ainsworth and Long Pine have museums.  Long Pine also has the county’s one historical site: The Miller Hotel, which has been turned into a heritage location.  You will also find two state recreation areas located in Brown County: Keller Park and Long Pine.