Home/Boyd County in Nebraska
Previous Next

On the very north central edge of Nebraska, you will find Boyd County which was named in honor of James E. Boyd.  According to the Nebraska Historical Society, Boyd was a man of many interests.  From working in Omaha construction, at his central Nebraska ranch supplying hay to Fort Kearny, then freighting and grading, he traveled the state.  After two different terms as Omaha mayor, he became the Nebraska governor from 1891 to 1893.  Sort of.  How can you sort of be governor?  Evidently Boyd was originally from Ireland.  Despite his fair and square election, Boyd’s predecessor Governor Thayer decided that his immigrant status disqualified him from serving in the state’s highest office.  The Nebraska Supreme Court agreed.  Through the almost year long appeal process, his case actually made its way to the United States Supreme Court.  They sided with Boyd who was finally able to take the office.  Not surprisingly, he served only the one term – my guess is that he was more than ready to be done with politics.

Because Boyd was the governor when the county was organized in March 1891, he got the name nod.  Technically Thayer was governor again in August when the county was declared a permanent organization.  Because Thayer already had a county named for him, not sure if he minded Boyd being the name of the county or not.  Besides the Nebraska governor fiasco that was happening during 1891, Boyd County itself also had a bit of additional drama during its beginnings as a Nebraska County.  At least for those who lived in the so called “Three Mile Strip” that was originally a part of the Fort Randall Military Reservation.   According to the county website, until this small area was surveyed in 1895, the settlers were not sure whether they lived in Nebraska or South Dakota.  The rest of the history on the county website makes for an interesting read. 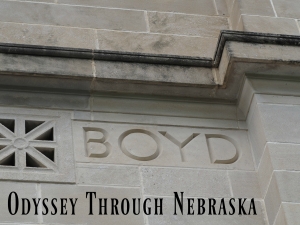 Evidently many settlers moved here from the North.  The former towns of Anoka, Mankato, Rochester and Rosedale are still towns found in Minnesota today even if they are no longer in Boyd County.  Technically Anoka still exists, but at only six residents, I am not exactly sure that counts.

Bristow, while a smaller town, is still hanging on.  Interestingly enough, this place was named for the President Grant’s Secretary of the Treasury, Benjamin H. Bristow.  I am not sure if he is directly connected to Nebraska, but evidently he was well known and respected.

Butte was chosen to be the county seat due to its central location.  Named for the Twin Buttes located 8 miles west of the town, this landmark is rather significant since the buttes are visible from South Dakota as well as five different Nebraska counties.

Lynch was named for the first postmaster.  Lynchburg was the town’s inteded name, but evidently the post office decided that was too long and simply stuck with Lynch instead.

The same thing for Naper which named for Ralph Naper who donated land to the town.  They wanted Naperville – the post office stuck with Naper.

On the National Historical Places list, you will find six Boyd County locations.  Two of the sites have restricted access: The Lynch archeological site (the site of a former earth lodge) and the Ponca Agency site, and I am guessing that you cannot just drop in at the White Horse Ranch either.  The Ponca Creek Bridge may also be a bit challenging to explore.  You can definitely drive by the SS Peter & Paul Catholic School in Butte.  Your best bet on exploring is to go to “The Tower” (aka “Old Baldy”).  Found east of Gross near the Missouri River, Lewis and Clark enjoyed observing the prairie dogs here a few centuries ago.

Part of the Karl E. Mundt National Wildlife Refuge and the Missouri National Recreation River areas can also be found  in Boyd County.  Sadly I missed Boyd County on my recent trip to Northern Nebraska, but I definitely would enjoy visiting someday.  The scenery looks beautiful!