Home/Buffalo County in Nebraska
Previous Next

Established by the Nebraska Territorial Legislature on March 14th, 1855.

Officially recognized as a Nebraska county on January 20th, 1870.

Can you guess how Buffalo County got its name?  Okay, so this one is a no-brainer.  Once upon a time, buffalo herds did dwell in this area.  Due to the proximity to the Platte River this county was one of the earlier Nebraska counties to be settled.

The description of these two former towns from Perkey’s Nebraska Place Names (p. 16-17 to be precise) is too interesting not to share.

Buda: One source says town named for a local settler; another, for Budapest, Hungary; and yet another for Buda, Illinois.  Another conjecture, Shelby (the former name of the town) was a railroad town with raily way equipment, probably from the Buda Foundry and Manufacturing Company; the new name Buda could have been taken from the boxes or equipment. 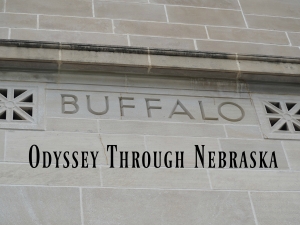 Perkey’s Place Names has some great stories for names in this chapter.  Here is another description directly from the book (p. 17).

Gibbon: Town commemorates Major General John Gibbon, veteran of the Mexican and Civil wars and Indian wars on the frontier.  Town platted by John Thorpe and George Gilman who led to this site from Ohio the Soldiers Free Homestead Temperance Colony.  County seat, first located here in 1871, lost to Kearney in election October 13, 1874.

Kearney was formerly Kearney Junction.  This town is named in honor of the nearby Fort Kearny which was named such in honor of General Stephen Watts Kearny.  Yes, the post office did spell his name incorrectly.  This time the book had a bunch to stay about some of Kearney’s earlier days.

Kearney became the transfer point for Texas cattle driver here for shipment by rail to the Chicago and Omaha markets.  During World War II, an army base was located here.  Kearney State Teachers College found, 1904.  It is now the University of Nebraska at Kearney.

Our family visited Buffalo County twice in the summer of 2016.  Although I have shared a bit about our trips, I still have plenty more to tell you further down the road.  For now, please do read the previous posts about two great Kearney destinations.

Why You Should Visit the Archway at Kearney