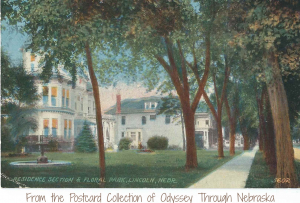 One of Lincoln’s early mayors, Andrew Sawyer, owned one of Lincoln’s first nurseries. As mayor, he and his wife hosted the entire town for their New Year Eve’s parties. Possibly they attended First Presbyterian?  After he passed away, his wife sold their property to that church.  Then the Floral Park ceased to exist. Now it is hard to imagine what this corner looked like when there was a lot of green space.

First Presbyterian Church started nearby. But they sold their building and land to build the Cornhusker Hotel. Because their current building was built in the 1920’s, they included many beautiful touches. Ralph Adams Cram, who was associated at one time with Capitol architect Bertram Goodhue, was known for his Gothic designs. His church design is a masterpiece. 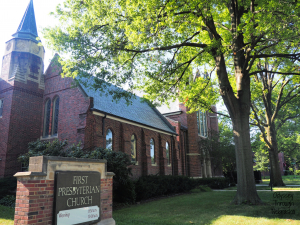 While some of the interior of the church was created to be more functional than beautiful, that is definitely not the case for the sanctuary.

Keats Lorenz, a local man who also created for the Capitol, did part of their beautiful woodwork. 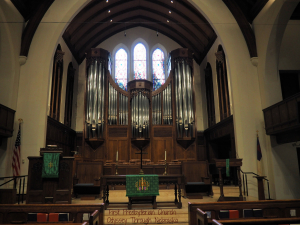 To help with the research of my book, I borrowed the church history written by Jean Holtzclaw. Since I do not have access to that currently, there are some details (such as who designed the organ) that I am not certain about at the moment. Touring churches was the favorite part of my research. Because faith is important to me, that is not surprising. But I think even more it is because of the fact that churches mostly remain intact. Many of the beautiful downtown Lincoln buildings are really not so lovely inside as they have been modernized. But thankfully many of the churches have remained intact and true to their original design.