Imagine coming upon this field around 1900.  Just looks like normal farm ground, right? 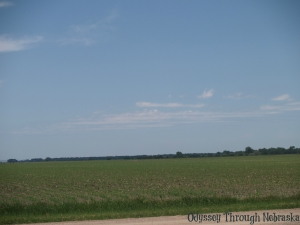 But if you looked across the road 50 years prior, you would have been at the site of one of the busiest forts along the Pioneer Trails. Fort Kearny. 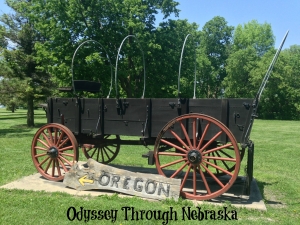 Due to the shortage of wood in the West, the fort and buildings were taken down soon after the fort was “retired” from service.  During the time of its use, hundreds of thousands of pioneers passed by heading past on the Oregon Trail, the Mormon Trail and even the California Trail in search of gold.  This Fort was where they all met or at least were within walking distance.  The surprising discovery to me (pointed out by the incredibly knowledgeable docent) was the fact that the Fort was actually quite large – several square miles in fact.  Now this whole part was not surrounded by wooden fence. 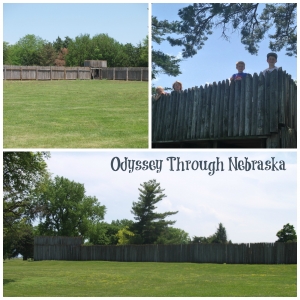 The picture that comes into our minds of Western Forts really do not represent the “fort” at all – instead we are thinking of the stockades.  In the above top left picture, I am standing in the middle of the stockade to take the picture.   This one was rebuilt – the orginal probably had a few more buildings. 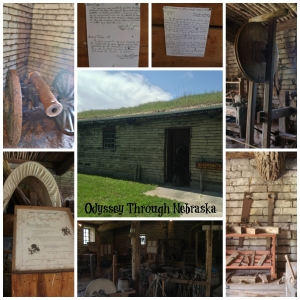 Beside reconstructing the stockade, the blacksmith shop has been rebuilt and restocked with pioneer artifacts. 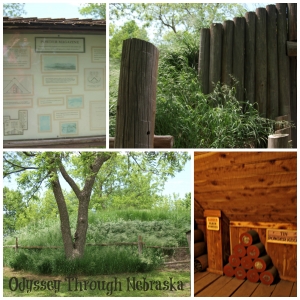 The powder magazine, built to resemble a dugout, is also similar to what would have originally held the ammo for the fort. 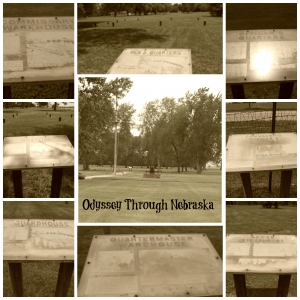 Although all of the original buildings were unable to be restored, they do have posts outlining their shapes as well as picture signs designating which building would have been where. 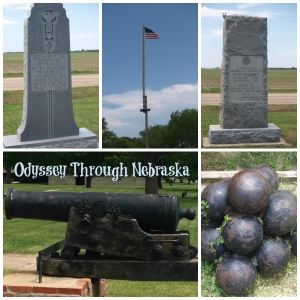 Memorials are also nearby to tell about the fort’s history as well as to give a glimpse of the fort’s purpose. 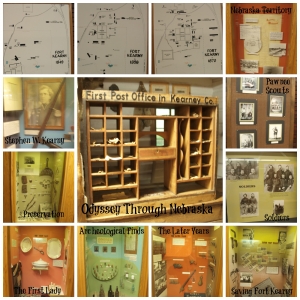 Besides having some fun outdoor places to explore, they have a museum that is packed full of information about Fort Kearny and the surrounding community.  Plus they have a rare short film that explains about fort  life.   Admission is only $2.  Because we had another destination, only I went through the museum section.  Our older two would have learned a lot from the displays, if they would have been patient enough to read them.  While the younger two would have enjoyed seeing the artifacts, too much required reading would have possibly hindered their understanding. 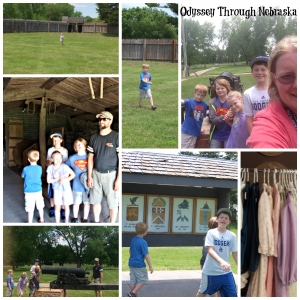 Overall, my family enjoyed the fort.  Having plenty of outdoor space to explore definitely makes this a great stop.  Because we happened to have had a long morning, I did not “teach” as much as I would have liked – instead I encouraged the kids to run around and learn by experience.  Right as we were leaving I discovered the rack full of pioneer clothes – our daughter would have loved dressing up and exploring.  If you have a child that feels the same, definitely stop inside the building first!

Note: To enter this fort, you must have a Nebraska Games and Parks annual permit.  This fort can be found several miles outside of Kearney.  Just in case you were wondering, the fort came first.  The town came later.  The post office is the reason that there is a spelling discrepancy.