Part of my exploring Lincoln for book research involved visiting churches. Someone told me that there was a stained glass window featuring Abraham Lincoln. When I checked out the location, I discovered that the large rotunda window included many American symbols beyond the former President. Then I discovered that Lincoln actually has patriotic stained glass windows in TWO of its churches. Both of them are connected by the same sponsor.   The GAR.

Do you recognize those initials? The GAR is the Grand Army of the Republic.  After the Civil war, the Union soldiers again found a reason to bond again – they found they had more of a voice together. If you would like to read more about this group, please check out more information found on the website of the Sons of the Union Veterans of the Civil War.  Despite the fact that Nebraska was only a territory at the end of the Civil War, the state does have a Grand Army of the Republic group. Because parts of Lincoln were once their own towns, the capital city community had multiple groups. 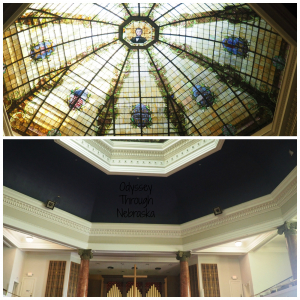 I started my research at the home of the Abraham Lincoln stained glass window. The G.A.R. of University Place purchased the grand window that is a part of the dome at First United Methodist Church located near Wesleyan. According to the church’s centennial booklet, the cost for that window was $162.00  Considering how large this windows is and how many symbols are included, that is a great price! The church members approved of the donation.  Other details about the window are not found in either this booklet or on the website. o 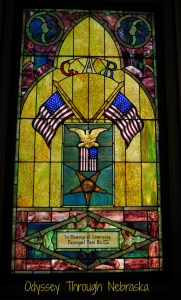 Pictured is the second patriotic stained glass found in Lincoln. This is the information on the stained glass window directly from the First Christian Church website.

The Grand Army of the Republic embraced veterans who served on the Union side during the Civil War. A total of 356 posts were organized in Nebraska from 1866 – 1908.  The Lincoln post was named for Admiral David Farragut, the first senior officer of the U.S. Navy during the Civil War.

More about the GAR patriotic symbols

In trying to find out more, I did find an archived paper from 8-1-1997  entitled “This great fraternity: Nebraska’s Grand Army of the Republic, 1867-1920” by Richard Evans Keyes as a part of his paper for his University of Nebraska at Omaha studies.  He has the GAR lasting longer in this state. The Grand Army of the Republic was responsible for spreading patriotism to early Nebraska. Monuments were constructed to honor the contributions of Civil War soldiers.

One may today find Civil War monuments in fifty-two Nebraska counties and one hundred of her towns. The 134 monuments predominantly take the form of obelisks
(fifty-six), soldier statues (forty-four) and cannon (thirteen). Other configurations include five cenotaphs, six stained-glass windows on churches, two Lincoln statues (Norfolk
Cemetery and Omaha’s Bancroft School), a statue of a “Weeping Angel” in Aurora, and even a bridge (the Bellevue Bridge over the Missouri River was dedicated as the GAR
Bridge in 1952). Monuments were placed in areas of prominence and permanence—cemeteries, courthouses and parks, although, the decline of cemeteries as “pleasure
grounds” in this century has greatly reduced the visibility of many memorials.

What I know: two of the stained glass windows are in Lincoln. I am not sure where the other four are in Nebraska. But I did find some patriotic windows online that are in Iowa, Illinois and Wisconsin.  So this is the reality of the life of the researcher. There is always more to find out and discover. But I do think discovering these two patriotic stained glass windows was a great find!

PS This is the official citation of the article that I quoted. Keyes, Richard Evans, “This great fraternity: Nebraska’s Grand Army of the Republic, 1867-1920” (1997). Student Work. 476.
https://digitalcommons.unomaha.edu/studentwork/476