The Soldiers of Lincoln High

The Soldiers of Lincoln High

Taking a tour of Lincoln’s oldest high school (Lincoln High) was a fun part of my History Lover’s Guide to Lincoln research.  Although I had been on campus for basketball games, I had never been inside any of the other sections of the school. I was grateful that Carter was able to take a break from his media duties to show me around.

Honestly I could write many posts about different parts of the school. I did include several paragraphs in the book. And I was very glad to be given a copy of the book, The Lincoln High School Story 1871-1971. But there was one part of the school that made me cry. While I mention the area, I was able to write very much or include many pictures.

Lincoln High School has a wall that pays tributes to all of its students who have lost their lives fighting for our country.

I was stunned. I have been in many schools, both as a student and as a parent. But I have never seen a military tribute. At least not like this one.

Another fact that surprised me was the where the marble was quarried from. This white marble is from the same strain that was used in constructing “The Tomb of the Unknown Soldier” monument in Washington DC.  Hanging the bronze plaques on the white marble helps them to stand out.

Because Lincoln High has been around so long, the tributes go back to World War 1.  I wonder if anyone would still recognize the name of a relative? 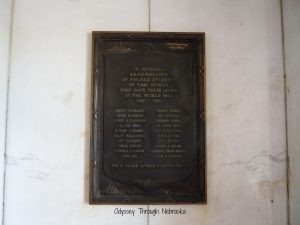 The plaque with the most names represents the World War 2 soldiers. 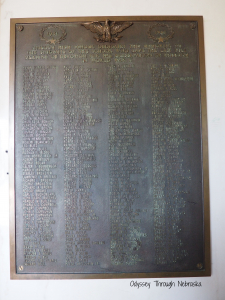 So far, the soldiers from later conflicts fit on one plaque. 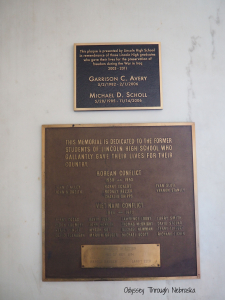 I wonder how many students have walked by these monuments and not even known they were there. If I had not been on a tour, I might have done the same thing. As the students graduate, I hope they remember this wall. Freedom has a price tag.