October 27th happens to be my birthday.  Last year around this, I was starting to working on organizing my pictures for Detour Nebraska.  I felt like I need a few more pictures – especially a photograph that would relate to fall.  So I asked two of my dearest friends if they wanted to bring along their children and join me for an adventure. 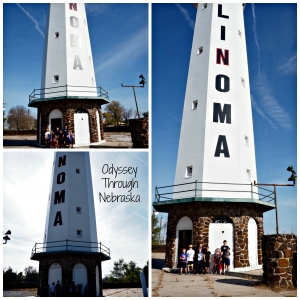 Our first stop was Linoma Light house.  On my trip out west, I had forgotten to stop at the Lake Minatare lighthouse.  Obviously light houses in Nebraska are rare.  Landlocked states usually do not have such structures.  Since I had fond memories of visiting Linoma Lake when I was a teenager, I thought this would be a fun place to take all of our kids.  New memories in the making.

When we arrived, it was rather obvious that the Linoma Lake was not the same as the one from childhood.  Now the lake is private property.  I recalled the lighthouse being on the lake.  Perhaps my memory is a bit faulty.  While you can see the beach, the lighthouse is set in concrete some distance away.  It has been beautifully restored.  But because access is limited, we had to get permission to climb inside the fence.  Plus I did not think about the fact that while I could get all of the kids in the picture, the lighthouse is rather tall.  To be able to tell the shape of the building meant that kids became rather microscopic.  Now this October 27th memory attempt is a funny one.  But it soon became clear that this picture was not going to be a part of my book. 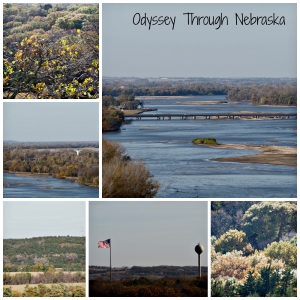 So we all packed up and drove down the road to Mahoney State Park.  Spending part of October 27th at one of my favorite Nebraska places worked for me.  The day was a beautiful one.  Many of the trees were changing colors.  I enjoyed getting to use my telephoto lens to capture the distance shore.  If you happen to look carefully, you will see that the Linoma Lighthouse made it into one of the pictures. 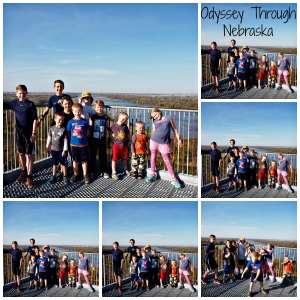 But I had promised the kids that as a part of my October 27th birthday celebration that we would take a group photo that could be included in the book.  The lighthouse was out.  The Mahoney State Park observation tower was on.  Obviously several photographs needed to be taken to get close the results that we wanted.  The larger picture is the one that was chosen to be a part of Detour Nebraska.

But life does not always end up the way that you intend.  At first one of my editors changed the picture from being a color photo in the middle spread to simply being a black and white picture in the middle of a chapter.  At some point, the picture got eliminated all together.  So these ten kids who are some of my favorites did not get to be in book after all. 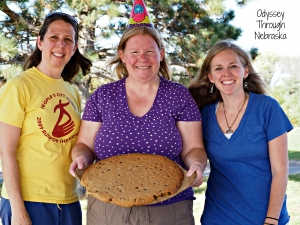 If not a book, then an October 27th blog post …

That is why I thought today, exactly one year later, that I could at least give them the gift of having a blog post devoted to them.  My four kids are a part of the bunch.  I can’t claim the other six, although I have certainly spent enough time with all of them.  And now that this is MY blog post, I can include a picture of their moms as well.  Thank you, Sarah and Suzy for all of the support that you have given me.  I love you and your families!