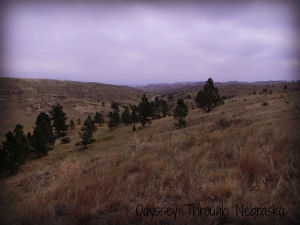 We did not intentionally set out to find Smiley Canyon.  At least I do not remember that was the plan that September day back in 2017.  When we left Fort Robinson, we were wanting to go for a drive.  To find an adventure that was beyond the fort’s boundaries.  But sometimes detours definitely provide the most enjoyable experiences.  And our drive through Smiley Canyon definitely provided us with a beautiful look at Nebraska that day. 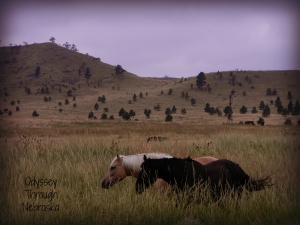 Besides the scenery, various grazing animals were abundant.  Smiley Canyon is sort of a refuge for animals that you might expect to see in the Western lands.  Horses were wandering about looking for feed among the grasslands.  They must have been used to cars following the drive because they did not startle when we passed. 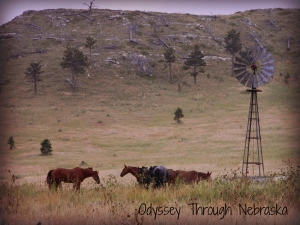 The horses near the windmills provided me with another lovely western Nebraska photo opportunity.  On that trip I developed a fascination with windmills.  And my attempts to try to photograph them from a moving car was rather funny.  At some point, that might become its own post.  Let’s just say that my efforts were not that pretty. 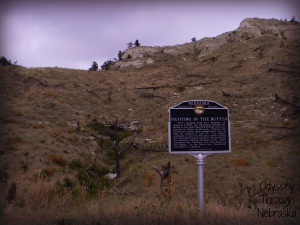 This location is also a spot of Nebraska history.  Evidently this was once the scene of some fighting.  In some of my earlier posts this month, I did include the Nebraska historical marker post texts.  But for this one on Smiley Canyon, my goal is to proclaim peaceful beauty not peace.  So if you are interested in knowing what the sign said, please click to the Nebraska History “Fighting in the Buttes” post. 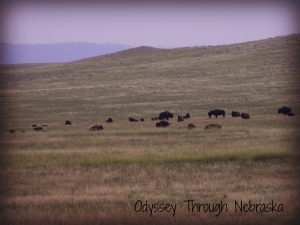 Because this adventure was long ago, I am no longer certain of the order of the animals.  If you have recently been to Smiley Canyon, I do apologize if I am getting this all wrong.  But I hope you can still appreciate the beauty of this Nebraska area.  Including this herd of far-off bison. 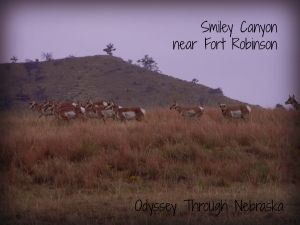 The most fun surprise of Smiley Canyon was definitely the pronghorn antelope.  Before this drive, I had only seen antelope in zoos before.  They looked beautiful and majestic galloping off together.

Before taking your family through Smiley Canyon …

As best as I can recall, there was only place to stop through the whole drive.  I believe that we were in the car for at least 30 minutes.  Be prepared in advance by having water in the car if you tend to have thirsty travelers.  (Of course, at best, there is only an outhouse, so you may want to limit drinks too.)  Plan on settling into the car for an enjoyable drive.

While nearby Fort Robinson made it into Detour Nebraska, sadly Smiley Canyon did not.  For one thing, finding any definitive information about this drive online is challenging.  Plus while it is beautiful, it is perhaps not as culturally and historically significant as the nearby fort.  But this drive is 100% worth it for a #detourNebraska.  In fact, next time we visit Fort Robinson, this is definitely on my list of priority excursions!

P.S. To add the black edging to my photographs, I used the “Urbane” filter on PicMonkey.  The irony of the name is not lost on me either. 🙂