Rivers of Nebraska: The NET Documentary

Home/Rivers of Nebraska: The NET Documentary
Previous Next

Rivers of Nebraska: The NET Documentary

Note: The Rivers of Nebraska was shown on NET several times during March 2018.  The program is still available to NET members as a part of  the NET Passport Program.

Traveled to the Platte River: check.  Traveled to the Niobrara: check.  So why did this documentary about two rivers of Nebraska that I have already seen interest me so much?  Because Nebraska Educational Television tells about more than the geological features of the rivers.  Instead the “Rivers of Nebraska” documentary touches on some of the people and places impacted by these two Nebraska Rivers.  Below the italicized quotes are directly from the NET program guide.

Nearly 80,000 miles of rivers cross Nebraska, crucial to the state and its people. They provide water for agriculture, municipalities and industry. In addition, they provide habitat for numerous plant, animal and fish species, some of which are endangered or threatened. But they provide beauty and enjoyment to the state as well. In Rivers of Nebraska, NET tells the tales of two of the state’s rivers, each with their own special story.

Although the Platte River does travel beyond Nebraska, the majority of it can be found in the state of Nebraska.  Water levels vary due to rainfall.  So the river’s use also varies throughout the year.

The Platte: One of the few braided prairie rivers, the wide yet shallow river is often known as the lifeblood of the state.  It was vital to the establishment of communities in the 1800s.  With the North Platte coming from Wyoming and the South Platte from Colorado, the two combine making the Platte the only river that extends from the western border to the eastern border of Nebraska. 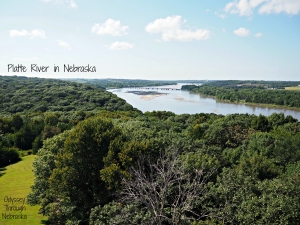 Found crossing the northern part of the state, the Niobrara River is considered a national scenic river.  This is a rare designation.  Besides offering amazing views, the Niobrara provides numerous recreation opportunities to visitors.

The Niobrara: Of the tens of thousands of river miles in Nebraska, only 76 are designated ‘National Scenic River’.  That’s a portion of the Niobrara east from Valentine.  One of the reasons for the designation is the biological crossroads the river area helps create for plant species biodiversity.  Another is the smooth flowing river that makes it great for canoeing, tubing and kayaking.

Nebraska has more mile of river than any other state.  Here is a list of some of the other major rivers.

I did enjoy this documentary on the “Rivers of Nebraska.”  You can watch this preview to learn more.