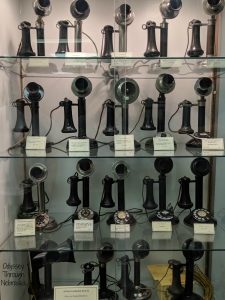 For years, I had seen the Frank H. Woods telephone museum on various passports.  I always wanted to visit.  Maybe the idea of seeing lots of telephones did not capture my attention.  More than likely, the fact that they are only open on Sundays (my one “day off”) caused me to not stop by.  Once I heard that this museum was more than likely closing, I knew that I needed to make it a priority.  Now that my kids have gotten older, finding the time to explore the state together has gotten harder.  So I must confess that I played the Mother’s Day card.  After church, lunch out and another errand, I told my family this was my Mother’s day wish. Of course this did cause all of them to go along with me. 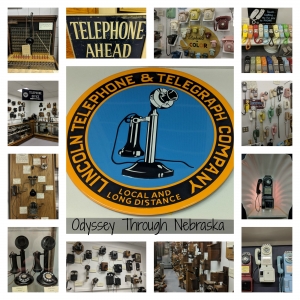 Right away, I wondered why it took me so long to explore this Lincoln wonder.  As you can see from the pictures above, the amount of telephones on display is staggering.  Taking the time to examine the details on the phones alone could take hours.  Who knew that there were this many ways that people have communicated over phone lines?

Why are these telephones displays significant?

Nebraska played an important role in this industry. 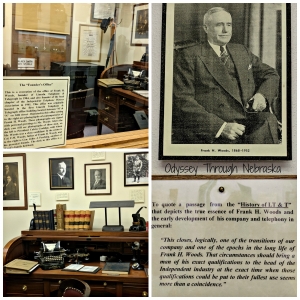 The reason that this museum got its name is because Frank H. Woods is the man who helped to stop the monopolies that were happening by phone companies.  He organized the Lincoln Telephone & Telegraph Company to help Nebraskans be able to communicate better.  Prior to his approach, there was a monopoly by larger communications company.  Woods established an independent company which allowed for better rates.  In the museum, they have a replica of his former office and information on all that he did for the telephone industry.  Seeing actual artifacts on display helps to remind me that there was a real person behind the progress.  Additional information on the beginnings of the Lincoln Telephone & Telegraph Company has been collected by History Nebraska if you want to learn even more about Lincoln’s telephone industry. 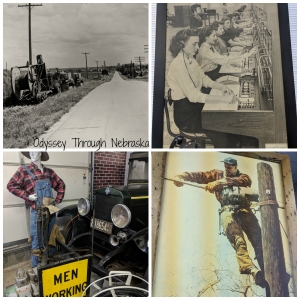 The telephone museum also helped me to realize just how much work went into getting telephones. Laying all of the wire took time.  Maintaining all of the poles took time.  In order to connect phone calls took operators a lot of time.  The feature image on this page shows just how complex some of the early phone systems were. I would imagine that many incorrect connections were made especially at the beginning.  Perhaps many a story was spread around town because of phone calls as well.  There is a reason why a popular kids game is called “Telephone.”  Messages can get mixed up rather easily.

What makes this an especially meaningful place to visit is the fact that retired telephone workers provide the tours.  These guides know their stuff.  Everything you could ever want to learn about telephones is displayed here.  Of course, for my younger kids their favorite part was playing with the demonstration telephones. 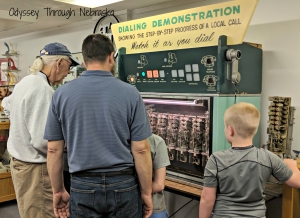 To have your own talking telephones experience …

This museum is open on Sundays from 1-4.  You can also make arrangements to see the museum by appointment. I highly recommend that you bring along family or friends.  The very best part of the experience was definitely having my family along with me!

Because when it is #mothersday , you have an excuse to get all of your kids to along with your plans! I have been wanting to go to this museum for years. So glad that the trip happened today. And that Kyle was with us too even if he is not pictured. Thankful for the four pictured blessings who gave me one of the best titles ever: mom!