The Legacy of Nebraska: Featuring Todd A. Williams’ Art

The Legacy of Nebraska: Featuring Todd A. Williams’ Art

Sometimes when you are going about your day, you make an unanticipated discovery.    During a recent quick trip to Aurora, Nebraska, I was granted permission by The Plainsman Museum to do a quick walk around to capture some photographs.  (Having been there several times for field trips, I enjoyed seeing their great exhibits through my lens and look forward to sharing my pictures with you sometime in the future.)  As I was enjoying talking to the curator, a small oil painting caught my eye.  This was the beginning of an unexpected ending to my visit. 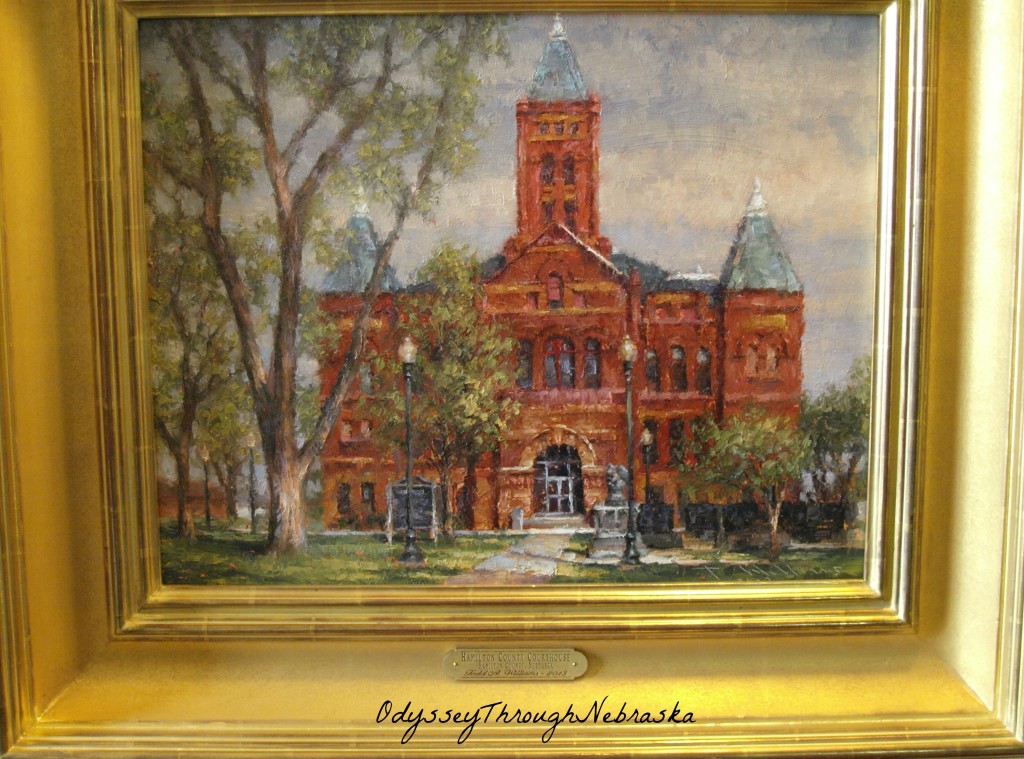 Having been to downtown Aurora many times, I immediately recognized the beautiful red brick Hamilton County Courthouse.  I asked her if they had commissioned the work, thinking that it was a one time piece.  Evidently there was much more to the story.

Todd A. Williams, a Central City Nebraska native, is undertaking a unique project.

For the months leading up to the Nebraska Sesquicentennial, he is traveling around our state painting at least one unique place in each of the 93 Nebraska counties.  Definitely glad I do not have to pronounce the word, sesquicentennial, which is just a fancy word for Nebraska’s 150th anniversary.

So far on his website, he has uploaded 29 of the paintings.  What he has portrayed of Nebraska, both past and present, is brilliant.  Several of the places I readily recognize, but I also appreciate the fact that a few of the images would only be found on back county Nebraska roads.  Those little corners that would be hard for the average person to find.

At the moment, I only know part of the story, but at some point I hope to know more.  Narrowing down which sites to illustrate had to be challenging.  Most of all, I love the vision for the project.  Just as I enjoy capturing Nebraska through film, seeing our state portrayed in oil might be even more amazing.

Besides this collection, Williams has also painted many places across the globe.  I must be a country girl at heart because his images of rural America and Nebraska are the ones that truly speak to me.  The fact that I am so drawn to his paintings is not surprising since I appreciate his artistic philosophy.  With permission, I share his quote from his artist’s site.

“Painting or creating art is nothing less than a prayer of visual expression to God.  As artists, creating is our form of worship.”