Tracking Down the Thompson Fountain

Home/Tracking Down the Thompson Fountain
Previous Next

Tracking Down the Thompson Fountain

Lincoln had a diplomat. One of our local politicians helped Teddy Roosevelt enough with campaigning that he was appointed Ambassador to Brazil. Obviously D.E. Thompson took the position, but he never forgot about his town of Lincoln. For the first several decades, Nebraska governors lived in his former home that he had sold to the city.  But he also donated a fountain to the city. 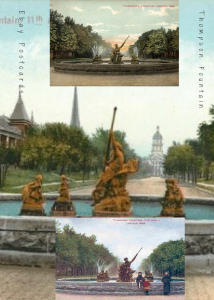 These are three different views of the fountain as seen on E-bay postcards.  The fountain was a great idea. Its location? Not so much. Putting a fountain in the middle of a street during the early days of the automobile was not a good idea.

Tracking down the current location of the Thompson fountain took me some time. For awhile, the base was in storage. The shiny figures found inside the fountain were sold for scrap metal. But the base remained city property.

Eventually the base became a part of Antelope Park. For a time, it was an animal enclosure in the zoo. Actually it moved around the park. Today this base holds a public sculpture in front of the former Chet Ager building.