100 Things to Do in Nebraska Before You Die

100 Things to Do in Nebraska Before You Die

My friends, Tim and Lisa Trudell, write the blog, “The Walking Tourists.” They are also authors. Their third book just came out – 100 Things to Do in Nebraska Before You Die.  I think they did a great job of narrowing down the places, and I have to admit that they featured places that I knew nothing about. This confirms the fact that you need to add their book to your library!  I asked Tim if he could tell us about the process of picking the locations.  The rest of this post are his thoughts on their book! 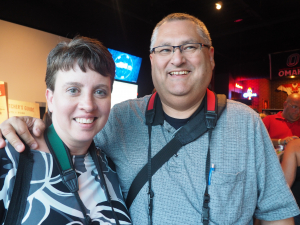 Anytime you write a book about an entire state such as Nebraska, the last thing you want to be is too heavy on major cities like Lincoln or Omaha. You want to showcase the state’s unique attractions. However, you don’t want to short those larger cities. So, when it came time to write 100 Things to Do in Nebraska Before You Die, my wife Lisa and I needed to determine how best to balance the state’s two largest cities without compromising other statewide attractions. While the project was fun, some of the early work was challenging, to develop a book fairly representing the state.

To be honest, I sat down at the computer and started typing in places, restaurants, stores, hotels, really anything that remotely sounded interesting. A book about Nebraska must include some obvious things – Chimney Rock, Carhenge, the Omaha zoo, and the state capitol. But, what else did we need to consider? In the end, we probably had 150-200 items on the spreadsheet. Then, came time to pare it down. After creating a new list, we found we probably had reduced it by 50 or so entries. Then, we divided the state into regions, to ensure balance, we ran another list, reducing the number again. This took several attempts, as we kept going back and forth with attractions and events.

In the end, we settled on the 100 Things to Do in Nebraska. They’re actually featured vignettes, so as we wrote, we also created lists. For instance, how did we determine what to write about it in Lincoln and what to include on lists? This wasn’t easy. Lincoln, contrary to some people’s views, is home to several fun, interesting, and unique attractions. The state capitol, roller skating museum, Museum of American Speed, Morrill Hall, quilt museum, just to name a few. So much to see and do in the capital city. How we wrote about Husker sports crossed our minds, with national championships in several sports.

To ensure plenty of coverage for statewide attractions, we planned to limit Lincoln and Omaha to no more than 10 entries each. This required a lot of thought. We discussed what we’d recommend right away to people visiting from out of state. In the end, we focused on 12 attractions or events in the Lincoln area, including nearby Wilber and Raymond. We believe we focused on attractions we’d want to see if we were out-of-staters. Several other Lincoln-area attractions are included in the book as part of suggested places to visit, on a list or highlighted in a breakout paragraph. We were thrilled to write about some of Lincoln’s outstanding attractions, and hope you’ll like the choices.

Lincoln is one of our favorite cities to visit, and makes for a great day trip or long weekend. From outstanding food (Honest Abe’s and Yia Yia’s will always be among our favorite places) to unique attractions, our capital city is a must-see for Nebraskans and visitors, alike.

Thanks to Gretchen for inviting us to talk about 100 Things to Do in Nebraska Before You Die. We hope you like the book. It’s available at local book stores and at thewalkingtourists.com/books.