Can we ever thank veterans enough?  Those who have sacrificed their time and sometimes even their lives on behalf of our country deserve our highest appreciation.  The 20th Century Veterans Memorial out in North Platte shows appreciation for our more recent national heroes.  Many people who served are remembered here. 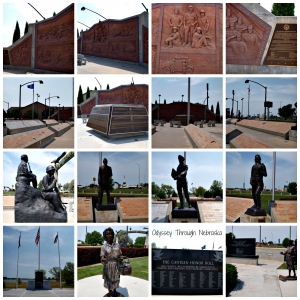 What I appreciated about the memorial is the fact that the community had the opportunity to get involved.  Hundreds of bricks lined the memorial with names of those who served.  Many of them from Nebraska.  My only wish?  That I would have the time and the ability to know each one of the stories.  Those represented in the statues could possibly be researched.  Maybe their stories could be discovered.  But I know that for many of these brave men and women, their heroics may never spread beyond their families.

This snippet taken from the Visit North Platte site provides a great explanation for what you can expect if you also take the time to visit this patriotic memorial.

The busy crossroads of the Eisenhower Memorial Interstate System, and the Veterans of Foreign Wars Memorial Highway, is the perfect location for this 20th Century Veterans Memorial.The Army, Navy, Air Force, Marines and Coast Guard as well as the volunteers of the North Platte Canteen are memorialized by bronze statues.

The five major conflicts of the 20th century from World War I to the first Iraq War are depicted in a 15-foot tall brick bas-relief mural.The memorial features a Walk of Honor, lined by thousands of commemorative bricks showing the names of veterans who served at any time during the 20th century. For a truly in-depth look at the impact of the North Platte Canteen interested visitors should also be sure to see the exhibit at the Lincoln County Historical Museum.

Since this location is south of the I-80 exit 177, the memorial is quite accessible.  Unless there is road construction like there was when we visited.  (Then you do need to pay a bit more attention).  As the memorial is located near a lake, this is a perfect park to stroll about and remember.  Donations are welcome.  You can pay your respects year round.