Home/Monday Memories: A Caretaker’s Cottage in Nebraska
Previous Next

Want to play a Nebraska guessing game?  I realize that today is not Wednesday when I normally have you guess our location.  But, this is too fun to try to see if you can identify where the above building that is in the feature image is located.  I am wondering how many people missed that it was even there.  Please make your guess, then scroll down a bit to see if you were right!

Did you guess the Omaha Zoo?  This lovely building can be found on the edge of the grounds.   Have you noticed the house before?  When we were at the Henry Doorly Zoo a few weeks ago, I caught a glimpse of the building and just knew that there had to be a story behind why the house is sitting at that location.

Asking a few questions was next on my agenda.  Upon calling the zoo, I asked about the house.  Obviously the person I talked to on the phone misunderstood me because he transferred my call to the vet.  (He thought I asked about the history of the hospital).  This mistake actually benefited me because the vet who talked to me just happened to have worked at the zoo for a few decades.  Answering a few of my questions, he highly suggested that I talked to Dr. Simmons.

At the time, the name sounded vaguely familiar.  Then I was told more details.  This man just happened to be the director of the zoo for over 40 years.  As you look around the zoo, many of the current exhibits were spearheaded by him.  Right now he is the active Chairman of the Omaha Zoo Foundation, and you can read a bit more of his story at the provided link.  Back to the building!  Here are the details that were disclosed to me – any error that is probably mine, and a contributing factor could be the fact that I took notes on the back of a bank slip.  Someday I will remember to carry that notebook! 🙂 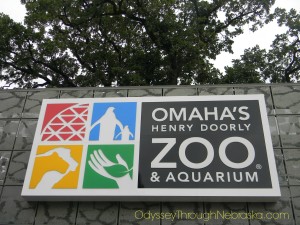 Two weeks I wrote about how Riverview Zoo Park became Henry Doorly Zoo, and in particular I focused on the former Riverview pool which now performs another function.  Initially the land was just a park until someone rather famous decided to donate a pair of bison calves.  If you were thinking the person might just be Buffalo Bill Cody, you would be correct.  (My understanding is that they did not stay residents for long, but I think that is whole other story!).  After several hundred animals found a home at the Riverview Zoo, they needed someone to care for them and the property.

In 1900, a caretaker moved into the cottage.  While the house looks brick, its composition is actually red granite paving stones that are a double layer thick.  For 65 years, the occupant of this place helped to maintain and run the zoo.  When in 1965, the zoo became Henry Doorly Zoo.  No longer was there a need for someone to live on site, although I am pretty sure zoo keepers are there 24/7.  Now that’s a different kind of night shift!  The building still stood and was at times used for various zoo projects.

One of the planned exhibits ended up causing a bit of a dilemma.  As they were getting ready to construct the new Desert Dome, just one item stood in the way.  The caretaker cottage stood smack dab in the middle.  Tearing down the well-built structure that could still potentially serve a purpose seemed unnecessary.  By moving the building west, the caretaker cottage could be saved.  You can walk by the home that is located along the path between the Desert Dome and safari animals section.  Now ten feet lower than its original elevation, the cottage survived the move.  Today it is found a new purpose for the zoo education department.  I did not get to venture inside, but maybe I will seek permission to do so on our next trip!

Coming sometime in the next few weeks: a full overview of our trip to the Omaha Zoo!

P.S. Thank you SO much, Dr. Simmons, for taking the time to call me back.  I was truly honored.  If I did make any mistakes, please have your office contact me, and I will correct them right away.