Did you know that Maxwell Arboretum is turning 50 years old?  This section of trees, flowers and grasses has been a part of the UNL East Campus for half a century!  While one purpose is for enjoyment, an arboretum is also intended to be used for scientific study.  That is why the arboretum is found on the University campus that is more devoted to agriculture.  Considering the fact that Nebraska was once considered a desert by some, the setting aside of prairie plantings is significant.

This afternoon, Tuesday May 16th, a ceremony is taking place at 2:30. In the East Campus Student Union, a program will commemorate the occasion.  George Briggs is the keynote speaker.  His planned talk is “Lessons from a Prairie Arboretum.”  The talk will be followed by refreshments, along with tours of the Maxwell Arboretum.

While Briggs is now the director of the North Carolina Arboretum, for several seasons, he was the director of the Nebraska arboretum.  During this time in Nebraska, he and his wife, Sara, became good friends of our family.  In fact, their kids are the same age as the kids in my family.  (Of course we are all grown-ups now!)  Last night, when I stopped by East Campus to take pictures at, George and Sara happened to be taking a tour to see how the arboretum had changed since their time in Nebraska.  Pictured with them is Eileen Bergt, UNL landscape architect who happens to be one of George’s former students.

As I was strolling around the arboretum last night, I wondered why I did not visit the tranquil location more often.  Tables are plentiful around the ground.  The setting is perfect for studying, reflecting or simply enjoying. I am not a botanical expert at all. So I appreciate the fact that plaques are also plentiful that explain the names of all of the trees, grasses and plantings.  The azaleas are especially beautiful right now, and they clamored to be a part of my feature image. 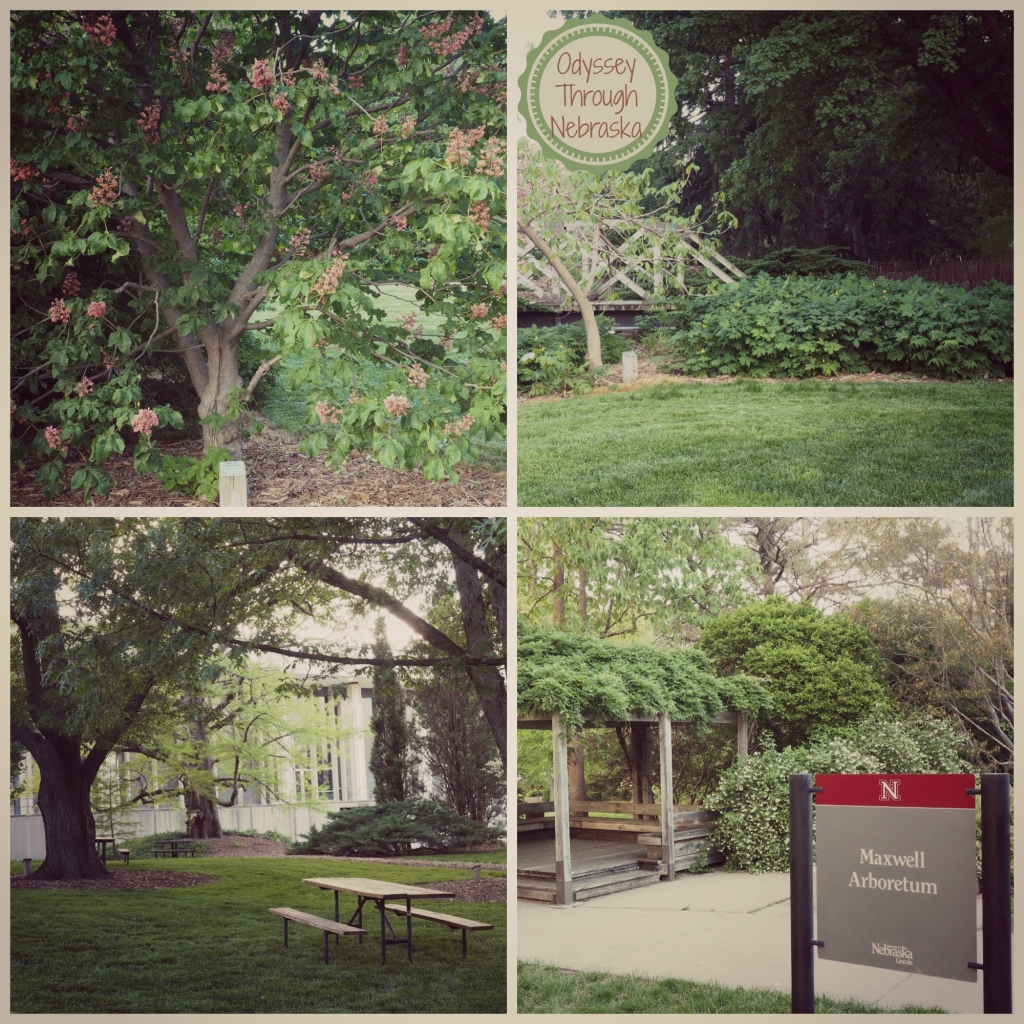 The Arboretum is named for a man who was a prominent part of getting this section of plantings started.  This clip from the History of Maxwell Arboretum tells more about the man behind the name.  The article was written on the occasion of the arboretum’s 35th anniversary celebration that happened 15 years ago.  (Yes, summer is almost here, but I can still do math. 🙂 )

Sixty years ago, Earl G. Maxwell began to plant trees here. A native of Indiana, Maxwell earned his master’s degree at the University of Nebraska in 1915. A few years later, he became the first Extension Agent for Douglas County, a position he held for 12 years. From 1934 until his retirement in 1952, Maxwell served as the State Extension Forester at the University. He administered the Clark McNary Tree Distribution Program and during his tenure millions of trees were distributed and planted by farmers and ranchers across the state.

With his encouragement and tireless dedication, shelterbelts throughout Nebraska worked to preserve our precious soils. Maxwell was interested in finding woody plants that could survive, even thrive, in Nebraska’s harsh environment. To this end, and out of a basic love of and interest in trees, Earl Maxwell began to trial species at the site that now bears his name. In the end, Maxwell planted and evaluated over 100 species. As Wilbur Dasenbrock has noted, “The older specimens of Maxwell Arboretum continue to demonstrate the value of his selections.”

The Celebration at Maxwell Arboretum

This afternoon’s event will be a wonderful celebration of plants on the prairie.  If you are unable to attend, do take the time to visit the Maxwell Arboretum.  Spending time in such a beautiful setting is inspirational.