In researching A History Lover’s Guide to Lincoln some of the information was not clear cut. Famous people were supposed to come and didn’t. Certain places were supposed to be built and weren’t. I am guessing there are many more than I am including in this post, but here are few things that are not found in the book. Why? Because they never happened.

For several decades, thousands gathered in Epworth Park to hear notable speakers.  The Park was packed with buildings, and now few traces can be found. The document that provided the most information on this annual event was a 1960 UNL thesis paper that I had to specially request from Love Library. In this paper, I read about some of the notable speakers and did include some of them in A History Lover’s Guide to Lincoln. But there was one story that stumped me.

The speech that never happened in Lincoln: President Taft Spoke at the Epworth Assembly.

This newspapers.com clipping is from the August 7th, 1917 Lincoln Journal. Former President Taft was scheduled the next night. But I struggled to find any follow-up story. That is because I finally discovered that he never came. Due to an extreme illness, his last Epworth speech that season happened that very night (8-9-17) down in Kansas. He became quite ill and could not travel anymore.

Through trying to find out more about President Taft at the Epworth Assembly, I did discover that he did speak in Lincoln on June 24, 1919. This speech was presented to the Knife and Fork club. Ten lucky average people were able to pay $2 each to join the club for the night. His topic: The Importance of the League of Nations. 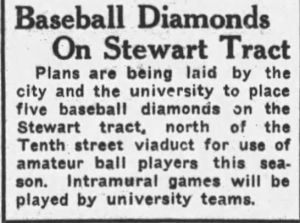 The baseball fields that never happened in Lincoln: The Stewart Tract.

Determining where the Stewart Tract was also took a bit of effort. This area was renamed Oak Lake Park around this time. According to the April 2. 1927 newspapers.com clipping, this was going to be the spot for amateur ball.  But the fields were never built. At least not for amateurs. Actually nearby did become a large baseball field – the Lincoln Saltdogs have been playing near this section of land for twenty years.

I found out about this pool on my behind-the-scenes tour of Whitehall last summer.  Evidently the plans were far enough in progress to required a detailed drawing. But the Nebraska Children’s Home never had their own pool. As far as I know, nothing in Lincoln is named for the former President. (I did discover that there was once a John F. Kennedy College in Wahoo.)  Anyway there is a lovely community pool near Whitehall, but this particular pool was never built. 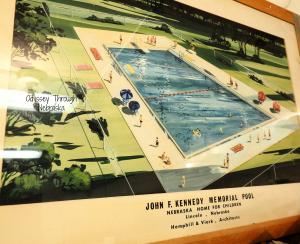 Anyone know of any other events that never happened or any other buildings that were never built?