While the name did intrigue me, I must confess that I drove by the sign for the Lee G. Simmons Conservation Park and Wildlife Safari Park for years.  I even often turned at the exit but went the opposite way toward Mahoney State Park.  Finally last fall, we went to the Wildlife Safari Park.  At that point, I wondered why it took us so long.

One of the pictures from that day’s adventure did make it into Detour Nebraska along with a shorter explanation of what there is to see at the Wildlife Safari Park.  To see which picture made the cut, see page 22 in the book.  Obviously we saw far more than I could tell you about in two paragraphs.  Or even more, we were able to photograph some amazing animals that (mostly) roam in the open. 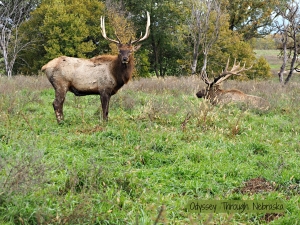 Perhaps I should clarify a few things.  This is also a mostly drive through safari.  Other than one part of the park, you are instructed to stay in your vehicle.  But you can travel through at your leisure.  For the first part of your drive, you are treated to visions of elk.  They cover many acres, and you can tell that they are used to people.  The grassland areas provide a plenty of feeding opportunities and seeing these majestic animals wandering about is a sight to behold. 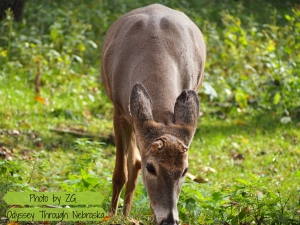 Next up are the deer.  While tame might be a bit strong of a word to use, you can see that they are also used to having cars drive through their habitat.  The photo credit for this amazing picture goes to my middle son.  Didn’t he capture a great moment?  Normally when I see a deer on the road, I panic.  So getting to see them up close in this way was enjoyable. 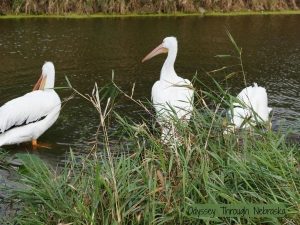 For the next part of the Wildlife Safari, you drive into some wetland areas.  I must admit the presence of pelicans was a bit puzzling to me as I normally do not think of this type of water fowl as being native to Nebraska.  But evidently they can handle the climate more than I would expect.  These birds seemed to be right at home among the grasses and in the lake water. 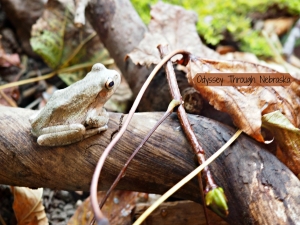 I am not completely anymore sure at what point we saw this cute little frog.  But he also found a home in this wildlife safari park.  Because of the presence of so many trees and branches, I am sure that many more animals were hidden from my eyes.  But I was excited to have photographed this cold-blooded creature. 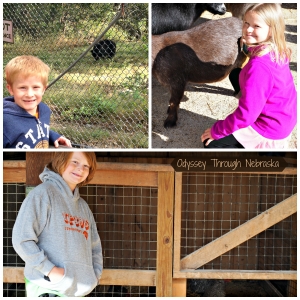 In the middle of the Wildlife Safari Park, there is a parking lot.  This works well because kids can only handle the driving part so long.  In a farmyard area, there are goats to pet and chickens clucking about.  My daughter enjoyed trying to befriend the goats.  And my middle son obliged me with a picture.  (Those days when they will willingly let me photograph there are winding down!) From there you can hike up to the bears and wolves. 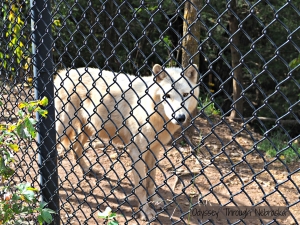 As I was reading through the Wildlife Safari section in my Detour Nebraska book, I noticed that I forgot to mention one thing.  The bears and wolves are behind a very tall fence.  In fact, it took awhile for us to even get a glimpse of the bears.  Thankfully my youngest one was with me when we finally found one.  The expression on his face is priceless.

Around the path, you can see another fenced off section that features the wolves.  That is definitely the closest that I ever hope to get to wolves.  The kids thought it was funny to run alongside the fence next to them.  I was not quite as amused as the wolves definitely can charge rather fast.  I was more than ready to leave this area. 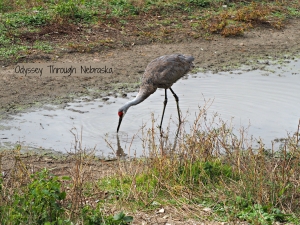 After this we continued driving through another wetland area.  I did not capture all of the birds that were in this section of the Wildlife Safari park.  But I did take a photograph of one of the Sandhill cranes.  I had never seen one of these birds close-up, so that was great. 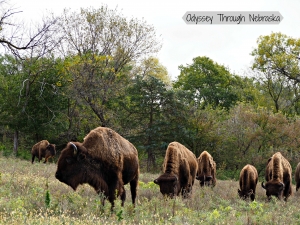 For the last area of the drive through Wildlife Safari Park, you will come upon the animal the once filled the Great Plains: the buffalo.  This is the part where it is especially critical to stay in vehicles as the buffalo are not quite the peaceful lumbering giants that they appear.  Evidently they can move rather quickly and are not always friendly.  Plus they are quite large.   Too big to mess with.  But being able to imagine what it must have been like to see these animals covering the grasslands was great.

There is an admissions charge.  If you go along with a group, the pricing is less expensive.  But be prepared.  If your group is larger, the experience takes longer.  This post shows the animals that are on the drive.  Up near the gift shop and gathering area, there are several additional smaller animals in cages.  Like a smaller zoo display. Kids seem to really enjoy this area as well.  Do bring your camera, bring some snacks and be prepared to enjoy some amazing animals.