Home/Arthur County in Nebraska
Previous Next

County officially established on March 31, 1887, yet was considered a part of McPherson County until a second legislative act in 1913.

Arthur County is not the smallest Nebraska county in area, but they do have the smallest number of people.  Less than 450 people live in this county.  This means that over 150 Nebraska towns actually have more people than the entire Arthur County.  In fact, Arthur County is potentially one of the five smallest counties in the whole United States.  Arthur is also the name of the only town with enough people to be officially counted.  You can still find the very small communities of Bucktail, Calora, Lena and Velma, although I cannot tell if any of them actually have post offices anymore. 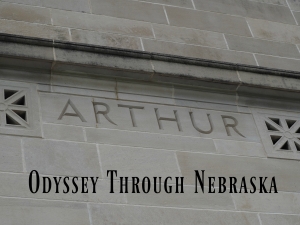 Carman for an area Methodist minister.

Collins for Charles J. Collins, former postmaster.  Interestingly the original post office was made out of sod.

Glenrose for the wild roses found in the area.

Velma was in Garden County – named for the daughter of Mr. and Mrs. Henry Redlinger

Arthur County has a very interesting history beyond just this … read more here.

Besides the beautiful Sandhills region scenery, the main attractions are found directly in Arthur.