Learning Behind Iron Gates at the University of Nebraska

Learning Behind Iron Gates at the University of Nebraska

If a fence was put around today’s UNL campus, that would be a tremendous amount of iron.  But when UNL was first built, all of the building were enclosed. According to this newspaper article, the goal was to keep students from arriving back to campus late and to keep out wandering cows. What else is clear is why this fence was removed. When there was a 1922 blaze, the fire department could not get inside to fight the fire.  Evidently the gates remained and were used as a bulletin board. 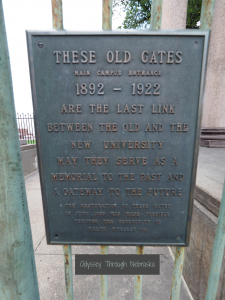 Although certain historic items did not survive the scrap iron drive of World War 2, students made sure that the gates did. But they were put into storage.  Alumni decided that the gates needed to be displayed. One paid to have the gates restored. Others helped with planning. On June 11, 1955, the gates were mounted permanently near Memorial Stadium. A plaque tells the story of the significance of the gates.

P.S. As for the nearby columns, please read the photograph caption on p. 73 in my book, A History Lover’s Guide to Lincoln to find out the original plans that Chancellor Burnett had for the columns. Campus would certainly look different if his idea had played out.