There are only two or three human stories, and they go on repeating themselves as fiercely as if they had never happened before. – Willa Cather-

Why do I write?  That is a question that anyone who ever puts pen to paper (or now types to visualize on a screen) definitely ponders.  Even though I will never be exactly sure who reads what I write or even if my words are ever heard by anyone, I will continue on.  Why?  Because I want to tell the unseen stories.

Curiosity compels me to find out what exactly happened.  In the long ago past – why towns and streets are so named.  How structures came to be.  About the people who have made their mark across my neighborhood, around my city and around my state.  The only problem – I do not have the time or resources to investigate all of my wonderings.  Enter Nebraska Stories. 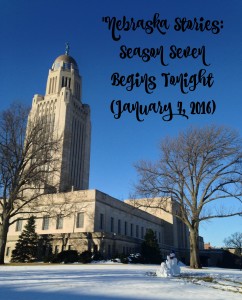 This  Nebraska Education Television (NET) show, “Nebraska Stories” is about to start season seven.  From the first episode I watched, I have been a fan.  This production is able to do what I cannot accomplish completely on my own – the seeking out of stories across Nebraska.  The goal is tell about what is happening all across the great state of Nebraska.  Features combine present day events with past day influences and include everything from Nebraska nature to historical sites to people that are making an impact in the community.  Each episode is comprised of several stories varying in duration as well as subject.

Earlier this week I had the opportunity to talk to two of the primary producers, Kay Hall and Michele Wolford.  These ladies have been a part of the Nebraska Stories series since the beginning.  Upon talking to them for awhile, I am thankful for their commitment to explore what is truly happening across the Nebraska.    I discovered that not only do they work hard at covering every region of the state, but they also work with a team of other producers.  This lends a multi-faceted approach to the stories as each person telling the particular story has an unique voice and perspective.  For them, getting to travel around the state to learn more about the people and places is truly a joy.

Because I believe in what they are doing, for this winter season, I will be devoting a Thursday post to tell you about the stories that will be told in each weekly episode.  In all, thirteen new episodes were created that include both newly created content as well as some archival material.  While I do plan on continuing my own various posts (in fact, I have a “Flashback Friday post already scheduled for tomorrow!), I am adding this “Nebraska Stories” component to my blog for now.  Later on today, I will officially begin this series by telling you about the TWO new episodes that will be premiering tonight at 7:00 and 7:30, CT on NET, Nebraska’s Public Television channel.  If you click on the link, you can watch the premiere even before I tell you about it later.