Upon examining slavery in Nebraska, one would naturally conclude that this issue did not have an impact.  After all, the Emancipation Proclamation, freeing all slaves happened on January 1, 1863.  The Civil War officially ended in April 1865.  Nebraska became a state March 1, 1867.  With statehood not even happening until after the slavery issue had been resolved (at least on paper although possibly not in practice), what difference did slavery really make in the 37th state?  More than one would realize.  Especially when you factor in that Nebraska had been an official territory since 1854. Nebraska’s Underground Railroad Path is an interesting one.

Dividing the land was directly determined by slavery arguments.  Hoping for possible political  and personal gain and to end the perpetual debating, Senator Stephen Douglas proposed that territories being annexed into the United States should determine their slave status.  Thus the Kansas-Nebraska Act was formed.  Pro-slavery citizens and Abolitionists  descended upon the territories.  This resulted in  heated arguments and a new nickname, “Bloody Kansas.”  These new sections of land were cause for debate for everything from railroad routes (free soil or slave land) to immigration of citizens from Eastern states.  This so-called compromise had further pushed a divided nation toward war.  You can read more about all of this on the excellent site, Civil War on the Western Front . This site helped me compile much of this information that I could no longer personally remember from my own study of U.S. History and from my tour that is mentioned below!

How does all of this specifically affect Nebraska?  Well, being further south, most Kansas adapted the bent toward slavery.  Except for on the fringes, much of Nebraska was against slavery.  A few of these Nebraska territory settlers had brought along slaves.  Of the 15 slaves found in Nebraska during the 1860 census, ten of them lived in Nebraska City.  To be involved with fighting against slavery, one had to be a bit discreet.  After all, Southern sympathizers were obviously a part of the community.  Why was far off Nebraska Territory even a part of this issue?  Fifteen slaves is not exactly very many.  Yet the Underground Railroad did come this far West because of the neighboring state of Missouri. 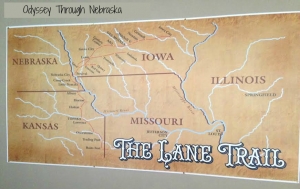 In 1820, the state of Missouri had entered the Union as a slave state, with Maine being free.  Due to their Southern and Northern locations. this made sense.  When thinking about the need for slaves, often only cotton states come to mind.  Yet at the time of the 1854 Compromise, Missouri had had 24 years of officially welcoming slave owners.

The Nebraska Territory shared a part of its Southeast border with Missouri.  An escaping slave could follow the Missouri River up past the Nebraska towns of Little Nemaha and Camp Creek.  Once arriving at Nebraska City, the fugitive could cross into the free state of Iowa, then gradually head to Chicago and blend in there a bit easier before fleeing to Canada.  Exactly how many slaves used this route is impossible to determine.  Observing the map, one can see that this escape route must have been used by groups of Underground Railroad passengers.

While the math may initially not add up, slavery did affect Nebraska.  I am grateful to Bill and to the Mayhew Cabin for enlightening me on this issue.  If you click on the link, you can learn more about this location’s part in the fight against slavery.  Even better, please go visit the Mayhew Cabin in Nebraska City in person.  The admission cost is low. The self-guided tour will impact even little visitors.  All four of my children LOVED exploring the site!  In fact, I plan on writing my next post about the impact this visit had on our own personal understanding of the Underground Railroad.