Home/Tuesday Thoughts: Toning Down the Husker Hype
Previous Next 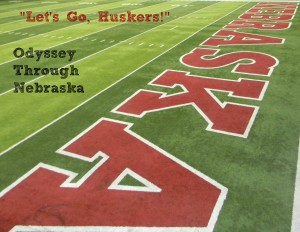 Growing up in Nebraska, becoming a Husker fan might be as natural as breathing.  My Dad’s office partners shared tickets, so we grew up going to a game or two a season.  That trend has continued with my own kids as 3 of them have already attended a game or two.  (Our girl will hopefully get her turn next year!)  What else do you wear on football Saturdays but red?  Yet right now I am pretty sure that I do not want to count myself among some of the supposed fans.  The Husker Hype can be a bit strong.

Maybe it all started with the advent of instant replay.  The point at which every play can be analyzed to death along with every move that is made or is not made on the field.  Causing unrealistic expectations for anyone who dons the uniform or leads from the sidelines.  Here are a few evidences that I have seen recently of some disturbing behaviors.

My husband and I started our own business this spring.  Overall, the experience has been a positive one, and we thank God for the opportunities that He has sent our way.  But has everything gone perfectly?  Absolutely not.  We have already  had several jobs where we would change certain aspects.  We know not to use well water now.  To tape off wood a bit better.  We are always learning from our mistakes and trying to gain a better outcome.  Business is a process.  So is football.  Expecting a complete overhaul of a system to have instantaneous results is a bit ridiculous.  Pretty sure we would already be done in the industry if the same expectations were heaped upon us.

Around here we are about to have our first teenager in the house.  I look at him and think in six years, he could be the one out there on the field.  (Well, probably not, since he has never touched a football other than playing catch in the backyard and is not exactly built for the game, but …) I think we often forget that we are watching grown up kids out there – boys who are barely out of school.  Boys who have the weight of a program on their shoulders.  I wouldn’t want to be in their position.

Through the years, I have also become acquainted with a few of the Husker coaches and their families on a casual basis.  I have also known many high school coaches.  This fact has caused me to recognize that they have lives beyond the field.  I can’t imagine my kids having to hear criticism of their Dad in the media the way that these children do.  Why is this normal?  Or necessary?  Especially since many of the strongest critics are those who have never touched a football outside of their own yards.  Those who think they could easily have won the football game despite never having even called a play. Coaching is hard, demanding work. My hat is off to them and especially to the football widows out there who tirelessly cheer from the stands as their husbands go for the “W” each week.

Now, granted, college coaches do make a fair bit of money.  Winning is a necessary evil.  Quite frankly, I would be less likely to be a fan if we consistently had a losing season.  Yet, do we need to be so harsh in our judgments?  Do we need to spout off about situations we do not truly understand?  I know a fair bit about football, but I am definitely not an expert.  I am guessing most of us are not.  How about we concentrate on cheering our team to victory rather than on criticizing every aspect of an activity that at the end of the day is just a game?

Check out this regular football blogger – facts without the Husker Hye

While I know just enough to make watching a game enjoyable, my fellow Lincoln blogger at at “Feit Can Write” regularly blogs about the Huskers.  Besides being full of factual football info this time of year, he is also rather funny.   Although he is one moving for a complete change of coaching stuff and would vehemently disagree with this post, I will still recommend his blog to you.     After all, he is the one that highly suggested that my husband and I order the brussel sprouts at Sebastian’s Table.  That was definitely good advice.