Cooking Around the U.S. from my Nebraska Kitchen: Stops 45-50

Home/Cooking Around the U.S. from my Nebraska Kitchen: Stops 45-50
Previous Next

Cooking Around the U.S. from my Nebraska Kitchen: Stops 45-50

We are finally to my last installment of state meals.  50 states in about 8 months!  Although I was a bit glad to be done with this project, I must say that it did help me focus my meal planning.  Knowing what I was going to make well in advance was quite nice.  Some of these last recipes actually ended up being some of my favorites.

The first three states we actually finished several weeks ago, but then we had to wait for our history timeline to catch up with Alaska and Hawaii.  I do hope to present our favorites recipes from all 50 states in a separate post just in case you want to just create the highlights. 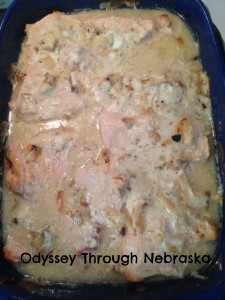 Chicken Utah  was rather yummy.  Why this recipe has the name, I am not sure.  We made this dish many years ago, and our recipe was just found in a Nebraska church cookbook.  But I figured since Utah was in the recipe, we would go for it.  The next night we tried the Utah Fry Sauce – a good excuse to bake fries at home.  This recipe has more traditional origins. I would make it again but in a smaller batch. 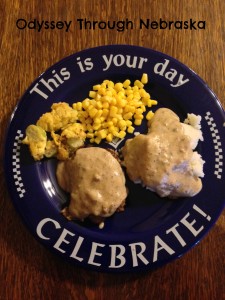 Did you know that Oklahoma is the one state with their own state meal?  Of course if you ate everything on the list, you may not be able to move away from the table due to being stuffed.   The recipes are mostly found on Taste of Home.   I decided to make the  corn, fried okra and chicken fried steak, adding mashed potatoes for good measure.  By the time I was done cooking, I was ready to celebrate! 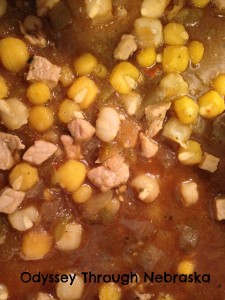 Creating a meal in honor of the state nickname was rather fitting.  And Land of Enchantment Posole did not disappoint.  This recipe was delicious and will definitely become a winter favorite.  The slight heat from the chiles and the cayenne adds the perfect warmth.  And this was the perfect way to add a new variety of vegetable: hominy. 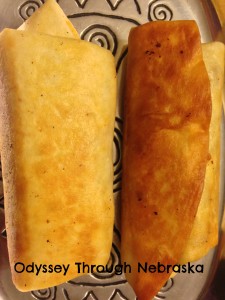 The fact that everyone in my house liked this meal was not surprising since we all like Mexican food.   Since the origins of the chimichanga can be traced to Tuscon, trying this dish made sense.  I chose to use ground beef, and I used some frozen diced hash browns rather than boiling than the potato.  Another recipe we would make again.

Growing up, I did not like asparagus.  At all.  This continued to adulthood.  In fact, my Dad reminded me that I came home from college and announced that I was done trying asparagus.  If I didn’t like it yet, I was not going to.  Well, once I had kids, I became a bit more open minded.  I could tolerate asparagus at least.  Until now.  Once I tried, this variation of roasted asparagus, I became a fan.  A “three helpings please” fan.  The original recipe featured blood oranges – I made the lemon variation.  So, so, so delicious! 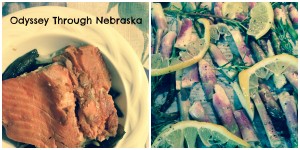 Actually not only did I like the asparagus, but I also really liked the site origin: Alaska from Scratch.  I am definitely willing to try her recipes again!!!!  In fact, that is also where I found the main dish: teriyaki salmon bowls with snap peas and sriracha.  Although salmon is generally liked around here, we often pass on having it due to the potential expense.  Upon discovering this recipe, I think we can reintroduce this healthy fish.  The rice bowl was a great way to enjoy smaller salmon portions and still feel full.  I did not add any hot sauce, but I think all of my boys did.

Many great options are available for Hawaiian cooking.  This time I went simpler with the meat.  Although the idea of roasting a pig in my backyard sounds intriguing, actually having to prepare it definitely does not.  The kalua pig in a slow cooker was a much better option.  I did start the meat first thing in the morning, and it almost did get a bit dry.  You definitely want to shred it near the end of the cooking time, then let it simmer in the juices for another 30-60 minutes to help the meat remain moist. 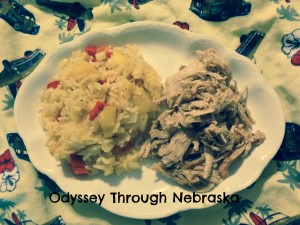 For the side, I tried a recipe that I found in the The Hali’Imaile General Store Cookbook.  This is a fun collection of Hawaiian recipes. Since I do not want to personally be responsible for breaking copyrights, I am not typing the recipe for the tropical fruit paella that I made.  But if you click here, you will discover that someone else did not have such qualms.  Regardless of how you get the recipe, you will want to try this tropical version of rice.  I loved it, but a few of our children thought that adding fruit to rice was odd.  Guess that left more for me!  I think sometime I want to try the crunchy macadamia chicken that was supposed to go along with the rice. 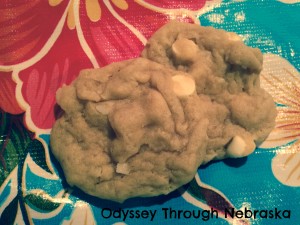 While I am sure I could spend a whole year just trying to find desserts across the United States, probably it is good that I just concentrated on the meals.  But for this last state, I did make a special cookie.  Other than the fact that it has macadamia nuts, possibly it is not exactly Hawaiian.  Since it was so very delicious, I think the recipe should still count.  Although I originally found the recipe on Pinterest, here is a link to the actual site.  I did crush the macadamia nights in the blender for a few seconds – they taste better to me when they are in smaller pieces.  The creator called this recipe “the best,” and she just might be right.

Thanks for taking this culinary trip around the United States with me over the past several months!